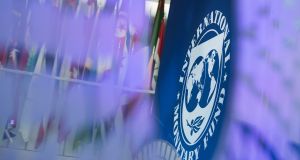 The IMF said the global economy was witnessing “the broadest synchronised global growth upsurge since 2010”.

The International Monetary Fund (IMF) has raised its global growth outlook, citing better-than-expected trading conditions in the Europe and Asia and the likely stimulus from tax reform in the United States.

In its latest World Economic Outlook report, the Washington-based fund said with 120 countries reporting a pickup in growth last year the world economy was witnessing “the broadest synchronised” upsurge in global growth since 2010.

As a result, it revised up its global growth forecast for 2018 and 2019 by 0.2 per cent to 3.9 per cent, noting the revision reflected increased global growth momentum and the expected impact of the recently approved tax policy changes in the US.

US president Donald Trump’s tax reforms were expected to boost investment in the world’s largest economy and help its main trading partners, the IMF said.

However, it also cautioned that US growth was likely to taper after 2022 as temporary spending incentives brought about by the tax cuts start to expire.

“The US tax policy changes are expected to stimulate activity, with the short-term impact in the United States mostly driven by the investment response to the corporate income tax cuts,” the IMF said in the update, which was released on the sidelines of the World Economic Forum in Davos, Switzerland. “The effect on US growth is estimated to be positive through 2020, culminating to 1.2 per cent through that year,” it said,

Mr Trump signed Republicans’ massive $1.5 trillion tax overhaul into law in December, cementing the biggest legislative victory of his first year in office. The tax package, the largest such overhaul since the 1980s, slashed the corporate rate from 35 per cent to 21 per cent and temporarily reduced the tax burden for most individuals as well.

The US economy has been showing steady but underwhelming annual growth since the last recession in 2007-2009.

The IMF said the short-term impact in the US would mostly be driven by the investment response to the corporate income tax cuts.

US tech giant Apple recently unveiled plans to bring home hundreds of billions of overseas dollars, pay about $38 billion in taxes on the money and spend tens of billions on domestic jobs, manufacturing and data centres in the coming years.

In its report, the IMF said that economic activity in Europe and Asia was surprisingly stronger than expected last year, and global growth in 2017 was now estimated to have reached 3.7 per cent, 0.1 point higher than the fund projected in October.

The IMF also revised up its growth forecasts for the euro area, especially for Germany, Italy and the Netherlands “reflecting the stronger momentum in domestic demand and higher external demand.” However, it cut its forecast for Spain’s growth for 2018 by 0.1 of a percentage point, saying political uncertainty was expected to impact business confidence and demand.