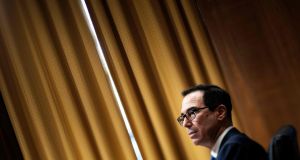 The call was led by US treasury secretary Steven Mnuchin and Federal Reserve chairman Jerome Powell.

Finance ministers and central bank governors from the Group of Seven (G7) advance economies vowed after a rare conference call on Tuesday that they are “ready to take actions” to prevent the fast-spreading coronavirus leading to a downturn.

However, shares opened lower on Wall Street - and European shares pulled back from their highs - as ministers and top central bankers failed to outline specific actions.

“We reaffirm our commitment to use all appropriate policy tools to achieve strong, sustainable growth and safeguard against downside risks.”

They added: “Alongside strengthening efforts to expand health services, G7 finance ministers are ready to take actions, including fiscal measures where appropriate, to aid in the response to the virus and support the economy during this phase.”

The call was led by US treasury secretary Steven Mnuchin and Federal Reserve chairman Jerome Powell.

Central banks from the G7 “will continue to fulfill their mandates, thus supporting price stability and economic growth while maintaining the resilience of the financial system”, the statement said.

Global stocks rallied on Monday from their worst five-day dive since the 2008 financial crash, helped by growing expectations that governments and central banks will step in to ease the economic effect of the coronavirus outbreak.

While the rebound continued into European trading, Wall Street’s lower open was compounded by news that a New York City high school would close Tuesday as a precautionary measure after a suspected virus case in the local community.

Financial markets are betting that leading central banks, including the Federal Reserve, will move soon to cut interest rates amid concerns over the impact of the virus on both the supply and demand sides of the global economy.

Although rate cuts won’t boost supply as the spread of the virus had hit supply chains and manufacturing facilities, cheaper credit could drive an economic rebound and boost confidence once the disease is controlled.

“Broadly, there appear to be two ways the Covid-19 pandemic could play out. In the less severe scenario, at worst we would be in for two quarters of negative /[gross domestic product/] growth, i.e. a technical recession, with a strong bounce in activity once the virus is under control,” according to Moritz Sterzinger, a director at financial risk management advisory firm Chatham Financial.

“The other, more worrisome, outcome would see a prolonged global slump. In such a scenario Covid-19 is the black swan that derails the global economic system from its current growth trajectory to a significantly lower one.”

Central banks would have to respond to the second scenario with another round of “extraordinary monetary stimulus”, he said.