Coronavirus shows how interconnected the world economy has become 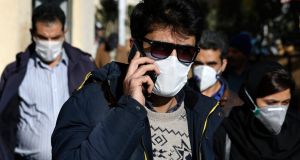 A man wearing a mask to protect against Covid-19 in Tehran, Iran. The world is now a much more fractured place, and unified action in the face of a global Covid-19 shock seems less likely. Photograph: AP Photo Vahid Salemi

What Brexit and the coronavirus have shown us is just how interconnected the global economy has become. We used to say “when America sneezes, the world catches a cold”, and while the big economies still dominate, that notion doesn’t really capture the complex web of supply chains that prevail, making the impact of shocks less containable.

The Organisation for Economic Co-operation and Development (OECD) sent fresh shudders through markets on Monday when warning Covid-19 posed the “greatest danger” to the global economy since the 2008 financial crisis.

Its assessment of the threat centred on two scenarios. The first and more likely is for a “contained outbreak” which would be short-lived, causing a severe downturn in China “a kin to an adverse supply-side shock”.

This will result in global growth slipping to 2.4 per cent, down from 2.9 per cent, and a 10 per cent slide in global equity prices and non-food commodity prices in the first half of 2020, as well as a range of other negatives, most of which will “fade away gradually by early 2021”.

The other more severe scenario, or “domino scenario” as the OECD calls it, involves the possibility of broader contagion. This downside risk considers the potential effects if the outbreak of the virus in China were to spread much more intensively than at present through the wider Asia-Pacific region and the major advanced economies in the Northern Hemisphere in 2020.

“In this event demand is likely to be significantly hit across much of the world for an extended period,” it warned.

In this scenario global GDP shrinks to an anaemic 1.75 per cent in 2020, while equity prices drop 20 per cent. Faced with this scenario, the OCED warned that central banks could also be constrained from action by their existing zero rate policy.

Another risk factor, not mentioned by the OECD, is the limited likelihood of concerted action. When the financial crisis hit in 2008, big economies acted in unison, but that was then. The world is now a much more fractured place, and unified action in the face of a global Covid-19 shock seems less likely, adding to its impact.