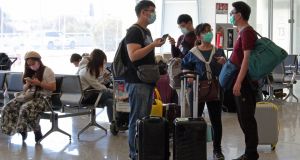 Thousands of air travellers face disruption as Ryanair and other airlines cancel flights in response to the spread of coronavirus. British Airways is also cutting flights to the Republic from Heathrow later this month.

Meanwhile, the OECD warned that a longer and more intensive coronavirus outbreak could halve worldwide growth to 1.5 per cent. However, the prospect of interest rate cuts helps global markets recover some of last week’s losses.

First-time buyers need to be earning nearly €100,000 a year to secure a mortgage for a new home in Dublin, according to a new report. Eoin Burke-Kennedy has the details.

Simon Carswell reports that scores of borrowers hoping for approval for these swaps to give them a fresh financial start in personal insolvency cases face uncertainty due to a High Court judge’s ruling that significant legislative changes are needed to allow “debt-for-equity swap” solutions.

A lawyer for bankrupt developer Sean Dunne indicated in court papers filed late last week that his client intends to seek damages from his son John Dunne for turning over more than $12 million (€10.7 million) to the trustee in Sean Dunne’s long-running US bankruptcy case.

In her media and marketing column, Laura Slattery as if it matters who owns Twitter, given the furore – on Twitter – over the shareholding in the social media giant now held by controversial hedge fund Elliott Management.

In personal finance coverage this week, Joanne Hunt shows that Irish women pay a particularly high price for their gender when it comes to pay, promotions and pensions. Meanwhile, Proinsias O’Mahony asks if ‘green’ stocks are a mega trend or a potential bubble?

Finally, Dominic Coyle advises a reader whose decision to gift a cottage to her son looks set to cost her €46,000in tax.

1 Goldman Sachs in talks to take over Blanchardstown shopping centre
2 ‘French people are pretty relaxed. They don’t pander to scaremongering or hysteria’
3 Giving your child a mobile phone: The pros and the cons
4 How much will a Covid-19 vaccine cost?
5 Guinness brings out a non-alcoholic version of the black stuff
6 Redundant reindeer, ‘jobs of tomorrow’ and the ExxonMobil call that ‘never happened’
7 John FitzGerald: North needs reform more than unity
8 How long can Government afford to keep State pension age at 66?
9 Fyffes agrees to acquisition by Sumitomo for €751 million
10 Why do we bother with stock market forecasts?
Real news has value SUBSCRIBE