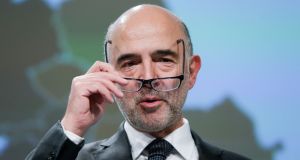 Pierre Moscovici speaking at the launch of the European Commission’s autumn economic outlook on Thursday. Photograph: AFP via Getty

The European economy is expected to sustain its seven-year run of growth for the next two years, but then “looks to be heading towards a protracted period of more subdued growth and muted inflation,” the European Commission predicts in its autumn economic forecast.

The commission’s forecasts for Irish growth this year and in 2020 and 2021 show a slowdown from 5.6 per cent to 3.5 per cent and 3.2 per cent respectively. But the projections are based on a soft Brexit and will have to be revised down further if a no-deal Brexit goes through.

The commission also warns of the potential for overheating in the economy.

Commissioner for Economic Affairs Moscovici said that the commission does not model scenarios like a hard Brexit but admitted to journalists that the prospect remains a real possibility which has to be prepared for.

The commission argues that the Irish figures are distorted by the activities of multinationals and it produces modified figures for the growth in domestic demand which strip out this effect – domestic demand grew by 2.3 per cent year on year in the first half of 2019 “supported by robust, albeit moderating private consumption and construction investment.”

Investment in the Irish economy is predicted to rise by 44.3 per cent this year declining to 4.5 per cent and 3.9 per cent in the next two years – the figures reflect a surge in imports of intellectual property in the second quarter of the year as multinationals seek to move taxable profits to the lower tax regime in Dublin as member states begin to get more serious about taxing them.

The imports are thus largely an international book-keeping exercise and do not contribute to the Irish growth picture.

Inflation may rise to 1.4 per cent by 2021, and the current account balance will rise from 0.8 per cent of GDP to 1.7 per cent. Gross debt as a share of GDP is expected to decline from 59 per cent this year to 53.9 and then 52.6 per cent. Buoyant tax revenues continue to sustain the public finances, the report says.

“Uncertainty mainly relates to the terms of the UK’s withdrawal from the EU and changes in the international taxation environment. More generally the difficult-to-predict activities of the multinationals could drive headline growth in either direction,” the report says.

“On the domestic side, the tight labour market and diminishing spare capacity point to an economy possibly operating above its potential. Against this background signs of overheating could become more apparent if adverse external shocks do not materialise.”

GDP growth for the euro zone is forecast to be lower than predicted in the summer: 1.1 percent growth this year and 1.2 percent in 2020 and 2021, according to its forecasts.

“With global GDP growth set to remain weak, growth in Europe will depend on the strength of more domestically-oriented sectors,” the report says, while acknowledging that “domestic growth drivers alone are unlikely to be sufficient to power strong growth.”

The euro zone’s aggregate public debt-to-GDP ratio is forecast to continue declining to 84.1 percent in 2021. But: “government balances, by contrast, are expected to deteriorate slightly,” the report says, also due to “somewhat looser discretionary fiscal policies in some member states.”

The government faces a challenge to convince markets that it is firmly in control and that political stability is the order of the day.