Chris Johns: Yes, it is possible to feel sorry for central bankers 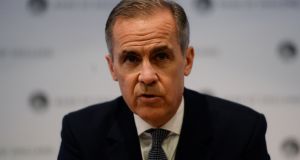 Bank of England governor Mark Carney is loathed by the Brexiteers because his facts don’t fit their narrative. Photograph: Reuters

It’s possible to feel sorry for central bankers. That’s a sentence I never thought I would write. Even if sympathy or empathy are not normal feelings directed towards the monetary high priests, we should at least raise a sceptical eyebrow at the list of things they get blamed for.

On both sides of the Atlantic, income and wealth inequality is laid at the feet of the central banks; likewise the existence of Donald Trump and Brexit. In Europe, the ECB is blamed for incipient inflation (always just over the horizon) and for always falling short of its inflation targets. Persistently high euro zone unemployment is Mario Draghi’s fault, as is recession in Italy and the fragile state of many European banks.

In Germany, the plumbing of Europe’s monetary system is forensically examined by conspiracy theorists who believe that feckless Mediterranean countries are surreptitiously being bailed out by the ECB. (Just Google “target 2 imbalances” to see how seemingly rational people can be driven utterly bonkers by the mysteries of double entry bookkeeping.)

A very specific charge is that quantitative easing has caused, or made worse, income and wealth inequality. All that money printing simply inflated equity and house prices, thereby making the rich richer. It’s an easy and intuitive story to tell. And wrong.

Faced with financial crisis, central bankers printed lots of money to prevent things getting worse. They succeeded: stock prices recovered following steep falls, as did many house prices. Typically, only rich people own shares and houses. Hence, central bankers helped the well-off to become even richer. That meant the left behind became even more unhappy and they voted for Trump in the US and Brexit in the UK.

All of this narrative involves correlation without any proof of causation. Nor do we know what the world would have looked like without quantitative easing. I’d venture that it wouldn’t have been pretty – or more equal.

If all central bankers get dumped on for the world’s ills, Mark Carney, governor of the Bank of England, gets more than his fair share. Jacob Rees-Mogg is a regular critic. Carney is hated by Brexiteers because he enumerates the consequences of their ideology.

He is one of the experts so derided by Michael Gove. It doesn’t help that he is foreign and clever. The label “Project Fear” sticks to Carney’s economic forecasts. That he got it more right than anyone else, including the Brexiteers’ own in-house economists, like most facts these days, doesn’t matter.

It is a peculiarity of the English that they believe someone can be “too clever by half”. It’s an anti-intellectualism that permeates British culture. It explains why English universities do disproportionately well in global league tables and why everything else, unless run by foreigners, is in relative decline.

The brightest people become academics in some of the world’s best universities and are kept well away from government and commerce. Smart, able youngsters, the brightest, only leave university if they can find a foreign investment bank or tech firm to hire them.

It’s called Wimbledonisation: as with tennis, high standards but few domestic winners. The best businesses are either owned by foreigners or, like the Bank of England, run by them. Those natives judged to be too clever by half are kept out of harm’s way in Oxbridge. John Maynard Keynes flitted between Cambridge, industry and government all of his working life and was lauded for his genius. That could never happen today.

While Carney gets blamed for rising inequality, the data shows that for the 10 years up to 2017, inequality barely changed in the UK. Again, a fact that doesn’t matter.

The real story is stagnant incomes: partly a phenomenon affecting lots of countries, partly the fault of David Cameron and George Osborne’s misconceived austerity. But to tell that story you have to sound like an expert, someone interested in data and alternative plausible hypotheses about what causes what.

The days when such people were relevant are so over. But, if anybody is still listening, the numbers for the most recent 12-month period show something new: UK inequality, after being stable for years, is now on the rise. And incomes are still stagnant. Welcome to Brexit Britain.

This blame game will not end well. The world isn’t going back to that great moderation where Clinton-style presidents balanced the budget and Greenspan-like central bankers made sure the economy grew as fast as possible. The technocratic settlement is over. Barack Obama will never be president again – nor will any liberal well-meaning, centrist intellectual, at least for a generation or two. Either Trump will get another term or Americans will flirt with another extreme (by US standards anyway) – a Sanders-style socialist or someone like Alexandria Ocasio-Cortez.

Who will Ireland and the rest of the EU be negotiating with after Theresa May has gone? That day is fast approaching. It won’t be the liberal, sensible centrist that we hope for: they are all dead, too old or irrelevant. Think about Boris Johnson as prime minister (current favourite of the bookies) and Jacob Rees-Mogg as his chancellor. Welcome to an expert-free world and the end of the golden age of central banking.