Chris Johns: Is investing in stocks a better bet than property?

Property is, in fact, a touch more volatile than most of us seem to realise while stocks produce the best returns of any asset class over the long run 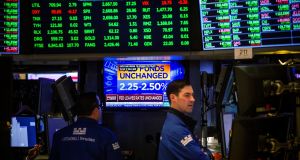 One of the silliest games played by hyper educated people, who really should know better, is any attempt to explain short term movements in stock markets

Weekend newspaper supplements often quiz somebody reasonably well known about their finances. The answers are often the same: ‘money is not my main motivation, my priorities are my family, friends and employees’ and other assorted fibs. One question that always receives the same answer is about property versus shares. People always say that they much prefer investing in bricks and mortar. They don’t like equities because they are, it is often asserted, too volatile or too difficult to understand.

That point about volatility is essentially correct. Consider the last few months. Through the final quarter of last year there was plenty of commentary predicting another financial crisis. At the same time, global stock markets were falling, sometimes quite heavily.

One of the silliest games played by hyper educated people, who really should know better, is any attempt to explain short term movements in stock markets. Those falls of last year were rationalised by apocalyptic sounding analyses that essentially said ‘there is an awful lot of debt in the world’ and ‘it’s a long time since we last had a decent recession’. It’s important to remember that stock markets drive commentary, not the other way around.

So far in 2019, Armageddon has apparently been avoided, with a near 10 per cent rise in global stocks. That’s the tempting conclusion to draw: buoyant stocks mean that the world economy is in fine fettle. Unfortunately, that would be wrong - this year’s market bounce means absolutely nothing at all.

That’s right, just as the falls in markets late last year carried few discernible significant messages, double digit returns this year represent merely good fortune - luck - for anyone who bought stocks over the Christmas break. It’s no wonder that many people give up on stocks as too difficult: that unexplainable volatility is real. Property prices can go up and down, but it is widely believed they mostly go up and do so in a much smoother way than equities.

Beliefs are one thing, facts are another. Property is, in fact, a touch more volatile than most of us seem to realise

Beliefs are one thing, facts are another. Property is, in fact, a touch more volatile than most of us seem to realise. But real estate has offered handsome rewards to many a well-timed purchase. Certainly, anyone who has been able to ride out a property cycle or two has done very well: those celebrities subject to gentle financial interrogation often mention buying a house for next to nothing in the 1970s and observing how many millions it is worth today. Good luck to them.

The fact is, notwithstanding the fabulous gains from their house purchase, they would, generally, have done better in stock markets. A more volatile ride, certainly, but the rewards would have been much better. The preference for property, notwithstanding the historically superior returns from stocks, must be driven by that fear of volatility: the fact that stocks produce the best returns of any asset class over the long run has been known for decades.

These are all general remarks about stocks. If we get more specific, we can build a slightly better case for the prosecution. Some stock markets, like the UK, have had a torrid couple of decades: the FTSE100 index, for instance, is currently at a level first seen in the late 1990s. Many stock markets have been beaten by bond market returns over the recent past, as well as some property markets. Bonds are not supposed to beat stocks according to the text books. Nevertheless, that general point about stocks is still correct: wait long enough and you will, typically, do better than any other investment you could reasonably make.

Second, that phrase, ‘wait long enough’, is a cop-out, since nobody can ever attach a precise meaning to it

Two slightly more sophisticated arguments about stocks would focus on time: first, all that data suggesting superior returns is, obviously, taken from the past. Second, that phrase, ‘wait long enough’, is a cop-out, since nobody can ever attach a precise meaning to it. How long is enough? Years or decades? We simply don’t know. And modern investors, we are told, should focus on algorithmically driven, super leveraged high-frequency trading if they want to make serious money from stocks. It really is no wonder that many of us give up and put our faith in property. Even if stocks are better in the long run, we understand property and the returns are still good enough, even if they aren’t necessarily the best - ‘good enough’ is a very underrated concept in the fee driven asset management world.

But remember that point about time: the conclusions we draw about property are as time dependent as the arguments we make about stocks, or any other investment. They are as backward looking as all investment conclusions typically are.

That definitive favouring of property over stocks is, therefore, perfectly understandable. But is it right? Will property be ‘good enough’ in the future? I have my doubts, particularly about residential property. First, it is interesting - but probably no more than that - to observe property prices flat or falling in many different parts of the world. Second, the global populist scourge is driven by many things but unaffordable housing is a big part of the story. There are a lot of vested interests lining up to stop property prices rising further. That’s not true of stocks.

1 Aer Lingus wants quarantine period axed to resume flights in July
2 Penneys will not reopen on Monday despite expected changes to lockdown rules
3 Angela Merkel sweeps in to save the euro zone
4 Biopharma company founder named EY World Entrepreneur of the Year
5 In six months we will be in the grip of a 1980s-style recession
6 Pandemic payment may be tapered based on previous earnings
7 Brother is dragging his heels as executor of uncle’s will - is there anything I can do?
8 ‘The recovery needs to be a full-scale economic renewal’
9 State’s tourism taskforce wants changes to school holidays to boost ‘staycations’
10 Up to 30 jobs saved at food company as court approves survival scheme
Real news has value SUBSCRIBE