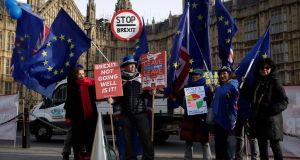 A proper accounting for Brexit will, eventually, be written. For that narrative to be compelling it will have to be compiled by psychiatrists, behavioural scientists, anthropologists and neuroscientists. Not, I suspect, with much involvement by economists.

Opinion polls suggest a second referendum would be won by Remain. Pollsters have also discovered that nobody has changed their minds since the first referendum. That’s not quite the paradox it seems: there are more remainers now because some leavers have died (they tended to be older) and non-voters from last time overwhelmingly say they would now vote Remain.

Despite all the sound and fury of the past 2½ years, few people have had cause to alter their Brexit views one way or the other.

That’s all part of a wider phenomenon common to populist politics everywhere: once our tribalism is awakened – the unleashing of identity – we don’t listen to facts, we refuse to absorb the lessons of new information and we seek comfort in the social media cesspit of like-minded partisans.

Evolutionary biologists speculate that such behaviour kept us safe when running round the savannah.

One of the common Brexit behaviours is familiar to students of modern finance: short-termism. Andrew Haldane, chief economist at the Bank of England, wrote a fascinating paper a few years ago about how modern neuroscience is shedding light (literally) on the parts of the brain (the prefrontal cortex) that generate patience, and the part that leads us into acute short-termism (the limbic system).

That bad bit of the brain drives the behaviour of children, addicts, crash dieters and lots of investors. At extremes, we display something called “hyperbolic discounting”: an irrational desire for instant gratification at the cost of the future.

Brexit now at any cost, in seven weeks’ time, combines all these modern aspects of tribalism, identity politics and short-term cravings. The future doesn’t matter. Brexiteers say they do not believe any of the established facts about what happens next: those forecasts about lower growth, fewer jobs and degraded public services are dismissed as “Project Fear”.

That jobs have already been lost and troops being made ready for civil unrest are details that can be completely ignored. When ministers now argue “we can survive Brexit” nobody notices the dramatic change of rhetoric from previous forecasts of “sunny uplands”.

The future is ignored by the Brexit ultras. Their focus on short-term victory completely ignores the years of tortuous negotiations that lie in wait – talks with the European Union and every other trading partner that will be nasty, brutal and long.

The current stalled UK trade negotiations with Japan are just one example of this. Japan is waiting for “after Brexit”, when it thinks it will be able to drive a harder bargain.

Another behaviour that modern neuroscience may explain is lying. Studies have revealed brain changes that occur when we first tell lies. For those of us who aren’t psychopaths to begin with, lying causes the brain to fire in certain ways that lead to us feeling, at the very least, uncomfortable. With repeated lying, the brain rewires itself such that the initial discomfort starts to lessen. Tell enough lies, repeatedly, and we can, apparently, feel quite good about ourselves.

Modern politics involves populists telling lies and eventually feeling okay with it. There is also the added fact that members of their tribe reward the liars. So with the brain silencing whatever conscience that might originally exist, and no punishment awaiting them, liars come to believe that lying is perfectly okay.

The list of lies told by leavers, Russian tweet bots and other nefarious actors have been well rehearsed. But nobody has ever been punished – despite proof of electoral rule-breaking. The politicians involved still appear on the BBC every day and some of them vie to be the next prime minister.

Still the lies continue. A British MEP opined recently that he could not understand the fuss about the Border “because only 100 lorries a day cross it”.

The right number, depending on the data source you use, is 12,000 to 13,000. A British MP complained in recent days about an “ungrateful EU” and the way it is treating the UK.

He suggested the EU should be respectful of the fact that its economy was rebuilt after the war with Marshall aid from the US, and that the UK didn’t receive a penny of such largesse. The fact that the UK was the single largest recipient of US money didn’t prompt a retraction or an apology.

But his remarks did attract approval from prominent Brexiteers. Hold a mirror up to these people, as did European Council president Donald Tusk, and they take extreme offence. The same people who complain that the EU resembles Nazi Germany and Stalinist Russia.

The writer Phillip Collins thinks that tribalism and populism will cause both main UK political parties to split. There is plenty of historical precedent for this.

The insight is that voters are now driven by identity, not class and not economics. And there is no major political party in the UK that caters for metropolitan, liberal types who still embody enlightenment values based on reason, truth, facts, logic and tolerance. Collins is right: a political rupture, perhaps more than one, awaits the UK.