Chris Johns: Billionaires – what are they good for?

Billionaire Michael Bloomberg may take on billionaire Donald Trump. How has it come to this? 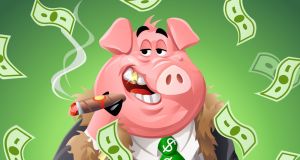 ‘Billionaires are difficult to wipe out. Wealth taxes are tough to collect and the wealthy adept at avoidance.’

Michael Bloomberg, creator of the eponymous financial data service, is considering a run for US president. An election between two billionaires.

That’s poured fuel over the debate over the worth of the mega rich. Not the measure of their bank balance, but rather an argument over whether or not the rest of us can afford them: do we benefit from their existence?

What motivates someone with, say, €20 billion to go for that next billion? All that time, effort and ruthlessness? Actually, it’s easy. Do nothing: you can get that next billion sitting next to one of your swimming pools. An average year in the stock market will easily generate another billion with enough left over for a few more mansions.

Journalist Ryan Avent (with the Economist) recently blogged about all of this. He, and others, note that while the US presidential race might be a contest between billionaires, some Democrats have the extremely wealthy in their sights. They want to tax billionaires out of existence. Bernie Sanders has an explicit policy goal of abolition. “Every billionaire is a policy failure” is the rallying cry.

Wealth taxes are a part of the battleground. Many analysts agree with Avent: billionaires are difficult to wipe out. Wealth taxes are tough to collect and the wealthy adept at avoidance. The new leftists argue that even if you can’t eradicate cockroaches it doesn’t mean you shouldn’t try.

The existence of billionaires may or may not be a bad thing. It depends whether they got rich by innovating or via monopolistic practices. Or because expensive lobbyists generate friendly tax laws. Or because we are stupid enough to hand them our valuable data for nothing. It really does all depend.

Taxing billionaires may or may not be a good idea; enforcing more competition certainly is. Attacks on billionaires risk misdiagnosing the problem: going after the symptoms rather the causes of the disease. As Thomas Philippon persuasively argues in a new book, The Great Reversal, competition and regulation are noticeable only by their absence.

We hear the familiar lament of the rich: “hard work and talent generated all my money.” Only an enlightened few ever acknowledge the role of luck. Lloyd Blankfein, ex Goldman Sachs chief executive, is one of many taking the cudgel to Elizabeth Warren’s ideas.

If he is as successful as the 12 European countries who have tried to tax wealth, Sanders will fall 90 per cent short of his revenue targets. Put historic investment returns together with Warren’s tax proposals and Jeff Bezos, Amazon’s founder, would still be worth $49 billion (€44.4 billion) according to Avent.

We could conclude that Warren and Sanders are more interested in signalling than eradication.

Data for the UK suggests an economy not as unequal as the US but more so than Ireland or the rest of Europe. In fact, income inequality seems to be falling in Britain. But there is a problem with the data, particularly for wealth. The rich on both sides of the Atlantic under-report their assets and exploit friendly tax regimes to ease their pain.

Taxation of multinational profits is also a significant part of the narrative. It’s underappreciated how US-centric these problems are. US overseas profits escape much tax because of US policy choices.

Seamus Coffey, boss of the Irish Fiscal Advisory Council, suggests a lot of the chatter around Apple’s €13 billion tax case is hot air. Many claim the tax is due not to the Irish exchequer but to countries around Europe. That’s not true. Coffey – and the Organisation for Economic Co-operation and Development – think the tax should belong to the US Treasury. If the Americans sorted out their tax code a chunk of the multinational tax problem would disappear.

Back to those billionaires. What drives them? From Shakespeare to Sky the answer is the same. It’s not just the number, it’s power. Watch Sky Atlantic’s Billions for a realistic, if hyped, depiction of what drives hedge fund and private equity types.

Those books and movies explore the pursuit and egregious exercise of power. Sometimes by force, always via money. Usually, but not exclusively, by men. Some of us are psychopaths at heart.

There is something in many men that leads to adoration of Mafia movies: a man seeking to do what he wants, whenever he wants, usually to somebody else. When The Godfather talks contemptuously about never being subject to the pezzonovante, too many of us mutter, “yeah”.

Watch Boris Johnson’s video, released at the start of the UK general election. It’s shot as he walks to the door of 10 Downing Street. The gait and the unnaturally held arms channel Peaky Blinders, another Mafia story.

Tommy Shelby walking through his factory. Money (and other privileges in Johnson’s case) as the route to ruthless deployment of power. Eminent historian Max Hastings believes Johnson’s premiership will “reveal a contempt for rules, precedent, order and stability”: the narrative at the heart of Scorsese and Coppola films.

Inequality is the problem but the bigger corruption lies with money, power and politics. Yes, it’s always been thus, but this big? From the top down the system is rigged.

The narrative is clear: the ultra rich have it sewn up. Those at the bottom, particularly at the very bottom, see the gap widening and their chances of bridging it shrinking. The paradox: Johnson and Trump are representatives of the mob who would keep things exactly as they are.