Chris Johns: Donohoe is right not to go near income tax cuts 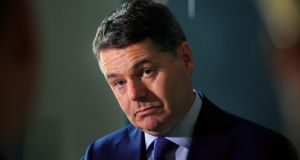 Minister for Finance and Public Expenditure and Reform, Paschal Donohoe.

Budgets have traditionally been a balancing act. Mostly, Finance Ministers have to steer between political and economic constraints. These aren’t necessarily in conflict but usually are.

The sums of money involved in the various budgetary measure might sound large but, in context, they are relatively insignificant. The most impactful budgets in recent years were during the great financial crisis.

Since then, particularly over the last few years, the usual sound and fury at budget time has signified nothing much at all.

This year, we return to the era of significant budgets. Not so much for the measures themselves – although they are not without consequence – but more for their role as markers for what could happen further down the road.

A very short road as the probability grows of a hard Brexit in three weeks time. A slightly longer path in the context of next year’s general election. In addition, our responsibilities and commitments with regard to climate change have the practical consequences of higher carbon taxes, albeit with some delays.

Few of us will argue with those higher taxes although the implications for fuel poverty have to be placed into the wider debate about inequality.

Brexit frames most things these days. The uncertainties associated with the whole wretched process means that planning, particularly of the fiscal variety, is being conducted almost in a vacuum.

The relatively limited sums set aside for overall economic stimulus and, in particular, help for those sectors likely to be worst effected, are to be commended. But they can only be pencilled-in guesstimates.

It would seem reasonable to expect that in a worst case, but increasingly probable, scenario more money will have to spent. And, therefore, borrowed.

This is a good time to borrow, even if we already have a lot of debt. Bond yields are vanishingly low. This won’t last forever but while it does we should be less worried than usual about extra government borrowing.

Those economic constraints of the past often involved markets either refusing to lend to spendthrift governments are only doing so at an extortionate price. Today, markets are falling over themselves to lend to the Minister for Finance, sometimes bizarrely willing to pay him for the privilege of doing so.

The other main constraints, Brussels rules over borrowing and state aid, are also less likely to be binding. A hard Brexit is the kind of external shock that demands flexibility: all the signs are that the EU recognises this and is unlikely to present too many roadblocks.

Provided, of course, that the borrowing is ‘sensible’. That’s the familiar call for targeted and temporary sectoral aid as well as more capital spending on infrastructure.

To repeat: not all reasons for extra borrowing are good ones. Congratulating yourself on only over spending on health at half last year’s rate does not smack of necessary budgetary discipline, whatever the external circumstances.

The Government has not been able to make much progress with its commitment to tax cuts, particularly in the form of increasing the point at which we become higher rate taxpayers. The desire to cut taxes is something that most of us will reflexively approve of. But a moments thought is required.

Lots of factors gave rise to Brexit. Different people had different reasons for voting for Donald Trump. The chaos unleashed by both developments has been the wonder of our age; today’s budget has, mostly, been a holding exercise getting us ready for the next, but far from final, phase of Brexit.

The societal divisions that are evident on both sides of the Atlantic have many causes. But one of them has been the drive towards lower taxation in both the US and UK.

There is a clear link between inequality, taxation and social cohesion. I’m not going to over-simplify by claiming it’s all about taxation. But one of the reasons why Britain is so unequal has been the social consequences of massive personal tax reductions.

And, I would assert, one of the reasons why Ireland does not have those same divisions, why the political centre still holds, why we still look like a cohesive country, is our taxation system.

I understand all of the arguments about our tax system. Indeed, I have repeated many of them in my columns for this newspaper. But looking at the total chaos, the fracturing of society, so obvious in the UK, I wonder whether this isn’t a moment to pause and reflect.

At the very least, I would urge anyone framing their manifestos for next year’s general election to think carefully before once again claiming that large personal tax cuts are clearly needed. Arguments that were once obvious can grow stale.

Preservation of our social cohesion needs to be a priority: what happens when it is lost, how easy it is to lose it, is obvious when we look at the convulsions gripping our nearest neighbour.

So, just as it is right to increase carbon taxes, it is right to think about fuel poverty and what we can do about it. And, more generally, what else we must do to ensure we don’t follow the example set by others. Something for everybody in the audience is, in context, a good policy rule of thumb.