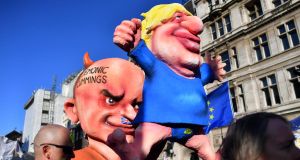 The scenes inside and outside the House of Commons on Saturday invite an obvious question: which tableau more accurately reflects Britain? The loutish behaviour of MPs, ministers, prime and otherwise, lying, again, through their teeth? The mendacity and incompetence of the governing class? Or noisy but polite (mostly) demonstrators asking for their country back?

Prominent commentators have berated their media colleagues for the way in which the Brexit process has been reported and analysed, particularly over the last few days. The critics point to the focus on whether or not Johnson would get his deal through parliament rather than an old-fashioned examination of what’s actually in the deal. Parliamentary arithmetic is apparently more interesting than the country’s future.

Where was the reporting of the fact that no government economic analysis of the Johnson-Cummings Brexit (JCB) has been conducted? Did nobody find it peculiar that 306 MPs tried to vote for momentous change yet without any knowledge, let alone scrutiny, of the detail?

If the UK’s political and media classes are truly representative of the country at large, JCB is exactly what Britain deserves. Where is the outrage over the fact that it is materially worse than Theresa May’s awful deal?

JCB has become a reality TV show almost devoid of content or meaning. All that matters is performance. “Just get it done” is the slogan du jour, but nothing is done, nothing is decided.

All of the key decisions are, once again, deferred. Even if Brexit does happen at the end of the month in practical terms nothing then happens for at least 14 months. Far from “getting it done” it hasn’t even started yet.

Johnson promised the European Research Group (ERG) a future trade deal that will amount to a virtual no-deal Brexit at the end of next year. He also indicated, speaking to a very different audience, that close alignment with the EU will be maintained, particularly with respect to labour and environmental standards. Other ministers made multiple mutually inconsistent promises.

Johnson will eventually get around to deciding which of his commitments to honour (my guess is none of them). As Keir Starmer, shadow Brexit secretary, said, the Johnsonian method couldn’t be clearer: promise then burn.

Even the hard-line Tory Brexiteers, the ERG, can’t be gullible enough to believe Johnson. The reason why they have gone along with throwing the DUP under the bus is not the prime minister’s commitment to hard Brexit at the end of 2020 but rather that they now consider the alternative, no Brexit at all, to be too big a risk to run.

Trade is tricky. It’s easy to lie about it, even easier to get confused by it. Johnson said in the Commons that once that free trade deal is negotiated, the new Irish Sea border will no longer be needed. This, as trade experts were quick to point out, couldn’t be more wrong. Was he confused or lying?

Politicians who lead with lies can’t be surprised if the tone they set is followed by the led. There is something rotten in the state of UK politics. The ways in which that corruption is seeping into daily life are worrying.

Jeremy Corbyn is the country’s greatest gift to Johnson. A principled but utterly incompetent leader of the opposition is a big part of the current political malaise: he’s been a Brexiteer since 1975.

The electorate has to take their share of responsibility: how many of the people demonstrating outside parliament voted for Corbyn?

More generally, the utterly shambolic nature of the Remain campaign itself and all subsequent efforts to thwart Brexit have been farcical. But, in the round, the House of Commons is what the country voted for.

The people outside parliament on Saturday voted for the people inside; the vast majority of those MPs were elected only two years ago on pro-Brexit manifestos. As Roosevelt famously remarked to Stalin, the British are a peculiar race, they want their cake and to eat it too.

Britain, especially England, has become an unserious country run by know-nothing zealots. It is comforting for flabby, centrist liberals to believe that an unrepresentative parliament is riding roughshod over traditional British values of tolerance, moderation and good governance.

Comforting but wrong. However deep they once ran, these values have been eviscerated. The strength of British culture and its institutions may have been tested to destruction.

The details of Northern Ireland sitting in both the UK and EU single markets have yet to be worked out. It could be that the North has been done an enormous economic favour: British industry may now have a rather large incentive to relocate there. The Republic may have just acquired a lot more competition.

I’ve thought for some time that Brexit will finish the union. I’m more convinced of this than ever. Welsh separatism, once a subject only of interest to comedians, is on the rise.

That’s mere speculation. What is certain is a brutal rerun of the past three years: a very unequal negotiation. But we will also learn the consequences of the serial lies told by the political class and the media.

JCB means something else in a different context; there is a very big hole being dug in British politics and society.