As the UK opens its markets to countries like the US, the EU will tighten its border controls 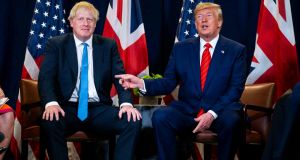 Will Boris Johnson, if he returns to office, really deliver a hard Brexit? This will be his campaign spin – get Brexit “done” and turn the UK into some kind of new economic superpower, freed from the shackles of Brussels. But the reality, if he tries to achieve this, will be more prosaic . Hard Brexit is possible – of course it is – but whether it could ever be politically achievable is doubtful.It all comes back to the basic madness that is the Brexit project and the fallacy that gains from new trade deals can somehow offset the losses of losing free access to European Union markets.

Not only is this a nonsense, it may not even be achievable, politically. If Johnson is elected, even with a more-Brexiteer parliament, pushing through a harder version of Brexit would be hugely challenging, as the costs of doing so would quickly become clear. And the advantages, new trade deals with other countries, led by the US, are looking dodgy, too.

Trump’s intervention is a reminder of who would run the show. The UK would swap regulations set in Brussels for ones set in Washington

On Friday, Donald Trump – who previously promised a “very big trade deal with the UK” – said that the terms on which the UK is planning to exit could make this impossible. Trump’s assertion on Friday on LBC radio, where he was interviewed by Nigel Farage, that “we can’t make a trade deal with the UK” on the basis of the new draft withdrawal agreement is a blow to Johnson.

There is no obvious reason why this should be the case. Indeed, we might speculate that Trump’s comments instead relate to Farage’s demand that Johnson abandons the withdrawal agreement – which would likely lead to a no-deal Brexit at the end of January. Johnson’s deal is “not Brexit”, according to Farage, which may be a nice soundbite, even if it is clearly nonsense.

Trump’s intervention is a reminder of who would run the show in any future negotiations between the UK and the US. The UK would swap regulations set in Brussels for ones set in Washington. It would be very difficult for a middle-sized economy such as the UK to simply set its own regulations – the essence of today’s economic world, from pharma regulation to aircraft safety to manufacturing to financial services and on and on – is interconnections. Autarky is not an option.

Consider what a harder version of Brexit would involve – and then consider the barriers to achieving it. The UK would leave the EU trading bloc and diverge from EU rules and regulations – thus, its supporters say, opening up the opportunity of new trade deals with countries such as the US.

The question is whether the man who said the UK would leave the EU 'do or die' could change direction again, faced with the realities after the UK does leave

But the trade-offs involved are never faced up to – the boring details stuff. If you want to do a new trade deal with the US, then first Trump will demand access to UK food and drug markets. This will be a huge issue in the election campaign – with debates about chlorine-washed chicken, hormone-filled beef and the UK’s National Health Service being “put up for sale”.

The more the UK opens up its markets to countries such as the US, South American states and so on, the tighter the controls the EU will insist on at its borders – and the less minded it will be to offer the UK attractive trade terms. Why should the UK have the best of both worlds?

The EU is nervous of a big economy on its borders cutting standards in areas such as environmental and worker’s rights and developing a low-cost model – Singapore on the North Sea. If the UK doesn’t agree to follow single-market rules and maintain standards and rules, as decided in Brussels, then it will not get favourable access to this market.

A fudge was agreed on Northern Ireland to get the draft withdrawal agreement done, but there is no way the EU will compromise when it comes to UK-EU trade after Brexit. Johnson’s current – stated – direction of travel suggests that, at most, a basic trade deal might be done between the EU and UK, perhaps not involving any tariffs, but leaving UK companies trading with the EU facing a blizzard of costly new checks, regulations and delays.

The question is whether the man who said the UK would leave the EU “do or die” last Thursday could change direction again, faced with the realities after the UK does leave. If he wins the election, and gets the withdrawal deal through, he will be faced with a choice – drive on towards the fantasy land of a hard Brexit, with the huge economic damage it could create, or start to edge back towards something more sensible. To the extent that Brexit could ever be described as sensible. Corbyn, if he wins, has promised closer future links, but also want to diverge to follow his own economic agenda.

So the fantasy world of Brexit politics rolls on, completely divorced from the reality and economic trade-offs involved. After the election, reality will quickly hit home. The “great new deal”, if approved, will only secure the UK’s exit. Beyond that, achieving a harder version of Brexit looks very difficult and economically hugely costly. If Johnson tries to head in this direction, I suspect the building economic upheaval would stop him in his tracks.

Of course this is all of vital national interest to Ireland. The harder the Brexit, the more the threat to Irish-UK trade and the more, under the withdrawal deal, regulations in the North would diverge from the rest of the UK. If Johnson is re-elected, the Government will hope that he can, indeed, get Brexit done. But after that, they will hope that the fantasy that is a hard Brexit does not survive contact with the reality of the negotiations and decisions to come.

1 Normal People: Full-frontal nudity was not its most radical feature
2 Luke ‘Ming’ Flanagan bares his bottom half to European Parliament
3 Michael McDowell: Black Americans fear the future and so should we
4 Gardaí investigate Dublin Black Lives Matter protest over Covid-19 rule breach
5 The subtle signs that point the way towards haemochromatosis
Real news has value SUBSCRIBE