China vows to impose tariffs on $60bn of US imports 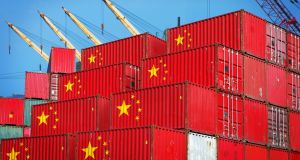 China has said it would impose new tariffs on $60 billion (€52bn) worth of imports from the US should the White House carry out its threat made earlier this week to raise tariffs on Chinese goods.

In a statement late on Friday, China’s commerce ministry said its decision was a response to US proposals that could increase the rate of tariffs on $200 billion worth of Chinese exports to 25 per cent, up from the White House’s original plan of 10 per cent.

The ministry said the “carrot and stick tactic” would not work. “China has been fully prepared and will have to retaliate to defend national dignity and the people’s interests, defending free trade and the multilateral system, as well as the interests of all countries globally,” the ministry said.

The ministry said the US tariffs were aimed not at addressing trade issues but at harming China’s peaceful development.

As the thunderous rhetoric continued to jangle nerves around the region and more widely, hitting stock market sentiment, there were signs that China and the US were trying to find a way back to the negotiating table.

China’s foreign minister Wang Yi met his US counterpart, secretary of state Mike Pompeo, on the fringes of a regional forum in Singapore on Friday for discussions ahead of a formal sit-down.

On Wednesday, President Donald Trump said he was planning to raise tariffs to 25 per cent from 10 per cent on $200 billion worth of Chinese imports. To date Washington has levied tariffs on $34 billion worth of imports from China as part of a first tranche of sanctions on $50 billion of goods.

Mr Trump accuses China of operating a too-high trade deficit with the US, and also of trade imbalances, of stealing intellectual property, of unfair trade practices and illicit technology transfers. The new duties could be imposed after a comment period closes on September 5th.

On Thursday this week Mr Wang urged US trade policy-makers to “calm down, carefully listen to the voices of US consumers and businesses, and hear the collective call of the international community”.

“The US method of exerting pressure will not have any effect, not now, and never will,” said Mr Wang.

While China is playing its cards close to its chest in the trade negotiations, there has been some pushback against those trying to assert too much Chinese superiority.

In an open letter by hundreds of graduates of the prestigious Tsinghua University, economics professor Hu Angang has come under fire for his suggestion that China has already overtaken the US as a world leader in terms of economic and technological power. In a rare sign of dissent, some graduates have even called for Mr Hu to step down over his “triumphalist” claims. – Additional reporting: Copyright The Financial Times Limited 2018