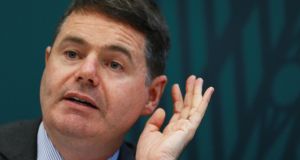 Government finances remain on target for 2018, with VAT joining income tax and bumper corporation tax receipts by running ahead of expectations in the first seven months.

The latest exchequer returns released by the Department of Finance on Thursday show the Government collected almost €29.7 billion in tax so far this year, up 5.5 per cent or €1.56 billion on the same period last year.

The total tax take is 0.6 per cent or €174 million ahead of the Department’s targets.

Income tax, the largest category, was 0.1 per cent ahead of target for the January-July period, although receipts for the month of July came in 4.4 per cent or €79 million below expectations.

VAT has swung from coming in behind to running ahead of target for the year to date after receipts in July, a month in which the tax is payable, were 4 per cent or €79 million above expectations.

This took VAT receipts to €9.19 billion for the first seven months, which was 0.1 per cent above target and up 4.5 per cent ahead on 2017’s performance.

Corporation tax remained the stellar performer. Revenues of €150 million in July were almost 41 per cent or €43 million ahead of target.

Excise duty again finished the month behind target, however. For the year to date, excise is some 6.3 per cent or €203 million below expectations and down 9.8 per cent year-on-year.

Stamp duty receipts of €759 million for the first seven months are up by a third on the same period last year, but are 6.4 per cent below target.

The figures point to an exchequer deficit of €277 million at the end of July, compared to a surplus of about €3.37 billion at the same point last year.

When adjusted for the impact of the Government’s AIB share sale in June last year, the exchequer balance shows an underlying annual decrease of €210 million, the department said.

The decline in the balance is mainly due to the increase in Government spending, which has been somewhat offset by higher tax revenue.

“This is another good set of exchequer figures, with VAT receipts now back on track,” said Peter Vale, tax partner at Grant Thornton Ireland.

Notwithstanding the slight disappointment of income tax receipts, overall there is “a positive picture” for Minister for Finance Paschal Donohoe with two months to go until Budget 2019, Mr Vale said.

Davy Research’s David McNamara noted that “buoyant” tax revenues were being used for a rapid rise in spending.

“With external risks growing, hard choices should be made in the upcoming Budget to eliminate the deficit next year.”