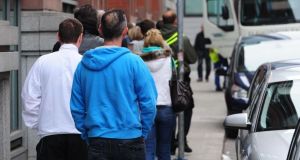 Seasonally-adjusted figures showed a decrease of 2,200 in the number of people signing on in July, bringing the total to 217,700.

The Live Register fell 1 per cent in July, hitting the lowest level since the recession began.

Seasonally-adjusted figures showed a decrease of 2,200 in the number of people signing on, bringing the total to 217,700. This makes it the lowest number recorded in the seasonally adjusted series since June 2008.

The unadjusted figures show a total of 234,445 persons signing on the Live Register in July 2018, an annual decrease of 14.6 per cent.

Short-term claimants still account for the bulk of the register, with 140,923 – 60 per cent – people signing on classed as such.