Brexit is already changing lives on the Border

From stag party organisers to farmers, politicians and priests, many in the North are already anxious 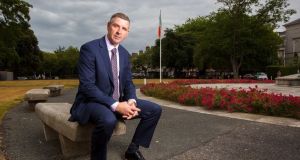 In the Brexit referendum campaign two years ago, Britain paid little attention to how exiting the European Union might affect the Border. Now, it’s the single biggest issue in negotiations, as the two sides have failed to find a way to keep the EU’s land frontier with the UK open. As the debate rages on – and the chances of a messy divorce increase the risk that some kind of border posts will eventually have to go up – many in the area are anxious about what lies ahead for business, daily life and even peace. For others, Brexit has already changed their lives.

Damian McGenity runs the post office in Jonesborough, a small village in Armagh, less than one mile from the Border.

The part-time farmer now finds himself a part-time lobbyist for campaign group Border Communities Against Brexit. His life changed the moment the UK voted to leave the EU.

“I was out calving on the farm and I remember watching the result on the news late that night. I knew it was going to be close – then when it was declared I knew we were in serious trouble.”

Fellow farmers, neighbours and business owners from both sides of the Border began to meet.

“We knew it was going to be a disaster for us, so we talked among ourselves about what we could do and that’s when the group was set up,” he said.

“Our objective is to educate Europe because we do not want a hard border. There are things we can agree on but the clock is ticking and I am really worried,” he said.

Father Joseph McVeigh, 72, is finding that Brexit is getting in the way of his priestly duties since he became a figurehead for the anti-Brexit movement in the Fermanagh-Cavan border region.

In Pettigo, a line in the tarmac marks the Border. The priest, who lives in the UK’s most westerly constituency and the furthest from Westminster lawmakers, has been providing tours of the area’s invisible border to press and tourists for the past two years.

“I have lived in Fermanagh for most of my life, I have seen bad times and experienced the great change that occurred with the Good Friday Agreement and the breaking down of the border following the so-called Troubles when people began to travel freely.”

“When the decision to leave the EU was made, I along with many others got a shock. I realised that I had to get out and share my views with all traditions.”

“Mass is a priority every day but this whole Brexit thing does take you away from other duties,” says McVeigh, who has been a priest for 50 years.

“I want people outside Ireland to understand how we feel and how we think. I have spent many days and hours showing people from Germany, Italy, France and Switzerland what the border is like –it’s usually a river or a bridge – and how absurd it is to have a border here at all.”

Fergal Quinn organises bachelor and bachelorette parties in Sligo, about 40 miles from the Border. A year ago, speaking to Bloomberg, he was relaxed about Brexit, as the referendum result wasn’t deterring the roughly 60 per cent of his customers who came from the North, spending the day painting nudes or jumping off cliffs before heading to the nightclub he runs with his brother.

Now, the Quinns are noticing a difference at the five venues they run, as numbers from the North drop by about 20 per cent, a move he mostly links to sterling’s tumble. Just before the referendum, a pound bought more than €1.30. Now, it’s about €1.12.

Against that backdrop, Quinn is targeting the Republic market. His biggest worry is the possibility of a hard border, with checkpoints and delays. “That would be a game changer,” he said. “It would really hurt us.”

The Unionist who became an Irish senator

Ian Marshall, 50, is a protestant and unionist who “strongly” believes Northern Ireland should remain within the United Kingdom. Now, thanks to Brexit, he finds himself catapulted into the upper house of the Dáil. Anti-Brexit and a former leader of the Ulster Farmers’ Union, the father of three was nominated to become a member of the Senate by Leo Varadkar, who wanted a Northern unionist perspective.

Everyday, I ask myself how did I get here?

“I was completely taken aback,” Marshall said. “I had to make sure I wasn’t a pawn in a political game, that there was no ulterior motive.”

“Everyday, I ask myself how did I get here? But this is so important – the Brexit collateral damage could be horrendous. The politicians who want this will be long gone, but our kids will be living with the consequences for 30 or 40 years.”

Kevin Woods has run the Shalom guest house for over 30 years with his wife Jackie. The 74-year-old lives on Carlingford Lough – where the Border runs through the vast sea inlet.

“For 30 years of the Troubles, a British gunship sat out there on the lough in front of our house. They will never return, it will never happen. If a customs border ended up here I think in the last few years of my life I’d be tempted to blow it up myself.”

Woods also has another interest: leprechauns. He calls himself the last leprechaun whisperer in Ireland, and runs the Last Leprechauns of Ireland websites, running one-hour tours including a visit to a cavern, where he regales children and adults with stories.

They way he tells it, the leprechauns sprint down a tunnel under the Lough on the south and meet with northern spirits.

For Woods, Brexit is leading to reunification, and not just among the leprechauns.

“There will be a united Ireland, it will come. I won’t make it, but others will.”