Nevin Institute calls for investment in education and infrastructure 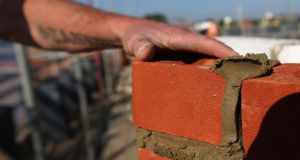 The Nevin Economic Research Institute report calls for increased investment in Ireland’s infrastructure to protect the Republic from threats such as Brexit. Photographer: Chris Ratcliffe/Bloomberg via Getty Images

The Government needs to boost spending on areas such as education and infrastructure to protect the Republic’s economy from long-term risks such as Brexit, a report published on Tuesday warns.

The Nevin Economic Research Institute (NERI) estimates that the Republic’s wealth will grow 5.8 per cent this year, creating 100,000 new jobs and increasing wages by 2.9 per cent.

However, the institute’s quarterly report highlights the UK’s departure from the EU amongst a number of threats to continued economic growth along with a possible rise in interest rates and international developments such as the threat of trade wars.

For the longer-term, the institute argues that public spending should be redirected to tackle shortfalls in education, infrastructure, research and development and childcare, where it says low investment can hit individuals’ future job prospects.

The report shows the State spends less per pupil at all levels of education than other European countries, particularly at third level, where the gap between the Republic and other nations was €2.1 billion in 2014.

NERI’s report also shows that historically the Republic has tended to spend less per person on infrastructure. However, figures for last year reveal this was €1,128 for every resident in this country – above a European average of €1,087.

The institute argues there is scope to raise extra cash from wealth and property tax. “However,” it states, “the bulk of the revenue deficit is a function of relatively low levels of taxes on labour, and specifically the low levels of social contributions.”