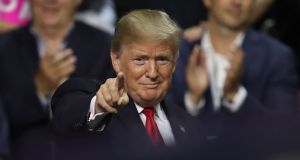 Donald Trump: China’s response to his tariffs was to impose tariffs of its own and accuse the US of bullying

Senior Chinese and US officials have been speaking privately in an effort to restart talks aimed at averting a full-blown trade war between the world’s two largest economies.

China has, however, warned the US against “blackmailing and pressuring” it over trade as the Trump administration mulls trying to force officials back to the negotiating table through threats of even higher tariffs.

Representatives of US treasury secretary Steven Mnuchin and Chinese vice-premier Liu He have been seeking ways to resume the talks, according to sources quoted by Bloomberg, amid reports Donald Trump plans to increase pressure on Beijing by slapping a 25 per cent tariff on $200 billion (€172bn) of imported Chinese goods.

Raising the tariffs to 25 per cent would escalate the trade dispute, and positive news that the two governments were trying to resume talks gave a boost to stock markets in the region.

Mr Trump’s administration initially said on July 10th it would seek to impose a tariff of 10 per cent on thousands of Chinese imports, including food, chemicals, circuit boards, steel, aluminium and various consumer goods, including beauty products, car tyres and furniture.

The tariffs were introduced to pressure China to introduce level playing fields for US businesses, and change policies regarding technology transfer, intellectual property protection and joint ventures.

China’s response to Mr Trump’s tariffs was to impose tariffs of its own and accuse the US of bullying.

While the conflict nominally is around the US’s $375 billion annual goods trade deficit with China, it has morphed into a chapter in the nations’ broader strategic rivalry.

China’s ministry of foreign affairs said it would fight back should the US further increase tariffs. “If the US takes measures to further escalate the situation we will surely take countermeasures to uphold our legitimate rights and interests,” spokesman Geng Shuang said at a press conference on Wednesday.

He said China had always believed that the disputes should be resolved through talks and communications, but the dialogue should be based on “equality and respect, as well as established rules and credibility”. – Additional reporting: Bloomberg