Fund delivers stark warning on UK leaving US without a deal, as well as trade tensions 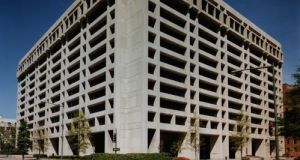 In its latest World Economic Outlook, the IMF downgraded its global growth forecast for 2019 to 3.5 per cent.

A no-deal Brexit risks triggering a further slowdown in global growth as countries hunker down for a turbulent 2019 in the face of growing trade tensions, the IMF has warned.

In its latest World Economic Outlook, the organisation downgraded its global growth forecast for 2019 to 3.5 per cent and 3.6 per cent for 2020 – 0.2 per cent and 0.1 per cent respectively below its previous prediction.

The Washington DC-based fund maintained its 2018 estimate for global growth at 3.5 per cent, but warned that weakness seen in the second half of last year will carry over in the coming months.

The fund warned that Britain leaving the European Union without a deal and a greater than expected slowdown in China could spark a further deterioration in sentiment and hit global growth, exasperating risks already posed by the deterioration in US-China relations.

“Risks to global growth tilt to the downside. An escalation of trade tensions beyond those already incorporated in the forecast remains a key source of risk to the outlook.

“A range of triggers beyond escalating trade tensions could spark a further deterioration in risk sentiment with adverse growth implications, especially given the high levels of public and private debt.

“These potential triggers include a ‘no-deal’ withdrawal of the United Kingdom from the European Union and a greater-than-envisaged slowdown in China,” the IMF said.

Growth forecasts for the global economy were lowered in October due to the tariff war between the US and China, but the IMF has downgraded projections further as a result of the new automobile fuel emissions standards in Germany, concerns about Italy and a steeper contraction in Turkey.

The IMF called on countries to “resolve cooperatively and quickly their trade disagreements and the resulting policy uncertainty”, instead of raising barriers further and “destabilising an already slowing global economy”.

“Across all economies, measures to boost potential output growth, enhance inclusiveness, and strengthen fiscal and financial buffers in an environment of high debt burdens and tighter financial conditions are imperatives,” the IMF said.

The growth projection for the UK in 2019 was maintained at 1.5 per cent as the IMF expects the effects from Brexit uncertainty on trade and investment will be offset by the fiscal stimulus announced in the Budget.

For 2020, growth projections were raised by 0.1 per cent to 1.6 per cent on the assumption that Britain will reach a Brexit deal this year and that the country will gradually transition a new regime.

However, it warned that currently, “the shape that Brexit will ultimately take remains highly uncertain”.