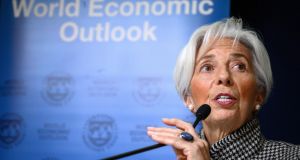 A no-deal Brexit could trigger a further slowdown in global growth, the International Monetary Fund (IMF) has warned.

In its latest World Economic Outlook the Washington DC-based fund said it had already revised down global growth for 2019 and 2020 on account of rising trade tensions between the US and China.

It said the UK leaving the EU without a deal and a greater than expected slowdown in China could spark a further deterioration in sentiment and hit global growth, exasperating risks already posed by the deterioration in US-China relations.

The IMF fund noted the possibility of “a disruptive no-deal Brexit with negative cross-border spillovers” had risen in recent months, while increased euro-scepticism might impact European parliamentary election outcomes in May.

“Risks to global growth tilt to the downside. An escalation of trade tensions beyond those already incorporated in the forecast remains a key source of risk to the outlook,” the IMF said.

“A range of triggers beyond escalating trade tensions could spark a further deterioration in risk sentiment with adverse growth implications, especially given the high levels of public and private debt.

“These potential triggers include a ‘no-deal’ withdrawal of the United Kingdom from the European Union and a greater-than-envisaged slowdown in China.”

Global growth in 2018 is estimated to be 3.7 per cent, it said, while noting signs of a slowdown in the second half of 2018 have led to downward revisions for several economies.

“This growth pattern reflects a persistent decline in the growth rate of advanced economies from above-trend levels – occurring more rapidly than previously anticipated,” it said.

Growth in the euro area was set to moderate from 1.8 per cent in 2018 to 1.6 per cent in 2019, highlighting softer private consumption and weaker industrial production following the introduction of revised car emission standards in Germany as a key factor.

It said there was “substantial uncertainty” around the baseline projection of about 1.5 per cent growth in the UK in 2019-20. “As of mid-January, the shape that Brexit will ultimately take remains highly uncertain.”

Another major source of systemic financial stability risk was a deeper-than-envisaged slowdown in China.

“China’s economy slowed in 2018 mainly due to financial regulatory tightening to rein in shadow banking activity and off-budget local government investment, and as a result of the widening trade dispute with the United States, which intensified the slowdown toward the end of the year,” it said, noting further deceleration is projected for 2019.