How the different Brexit options would affect UK 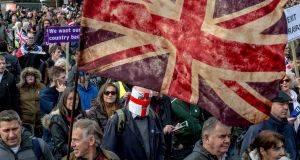 Pro-Brexit demomstrators in London. The fortunes of Britain’s economy hinge on what sort of relationship with the EU the country finally decides on - and the options range from no deal to no Brexit.

The fortunes of Britain’s economy hinge on what sort of relationship with the EU the country finally decides on - and the options range from no deal to no Brexit.

Following the defeat of Theresa May’s deal to leave the EU, City economists have published widely differing views on the probability of the possible outcomes. Yet there is clear agreement that the current deadlock is damaging the economy, and that the softest Brexit possible – or no Brexit at all – would best serve UK economic interests.

“Ongoing uncertainty. . . could have a pernicious effect,” said George Buckley, at Nomura.

Consensus Economics has compiled independent forecasts of the short term outlook based on the prime minister’s deal passing, no deal and remaining in the EU. The government’s economic analysis of different scenarios, alongside its white paper on immigration, contain the building blocks needed to give a good estimate of what officials think the longer-term impact of different options would be.

If the UK leaves on March 29 with no deal, economists are not now predicting a recession because the EU is prepared to mitigate the effects temporarily. But UK output growth will slow sharply to just 0.9 per cent in 2019 and 2020, according to Consensus Economics.

The costs rise, however, as the UK adjusts to its new circumstances, with tariffs at the UK-EU border, significant non-tariff barriers on goods and new restrictions on trade in services.

According to the government’s white paper on migration, the inflow of migrants from the EU would fall by 80 per cent, which imposes significant further costs, according to the official impact assessment.

One downside is that Britain would not be able to strike meaningful free trade deals with other countries, although it might win regulatory gains in the service sector.

After 15 years, the long-term estimate is that the economy would be 9.1 per cent smaller than if the UK had remained in the EU, the government said.

This is the outcome sought by most Brexiters. It has proved impossible to negotiate because it clashes with Britain’s pledge to avoid infrastructure on the Irish border.

Even if that changed, the economics of a free trade agreement are not that much better than that of no deal, according to the published assessments.

There is no specific short term forecast available. In the long term, a free trade agreement avoids tariffs and some non-tariff barriers. But many obstacles to trade remain, including the burdens of completing customs declarations and product checks to ensure goods meet both EU and British regulations. Services’ access to the EU would be significantly weaker than now and migration much more restrictive.

The total costs in the official analysis suggest the economy would be 6.3 per cent smaller by 2034 than if the UK had remained in the EU.

A customs union with alignment on goods regulations

Britain was heading in this direction under Mrs May’s deal. If Britain aligned its product rules with the EU and joined a customs union, it would be able to keep an infrastructure-free border with Ireland and minimal new checks at the key Dover-Calais border. For goods, it would have a closer relationship with the EU than Switzerland, although it would lose free access to the EU services market.

One downside is that Britain would not be able to strike meaningful free trade deals with other countries, although it might win regulatory gains in the service sector.

It probably could still introduce its own, much more restrictive, immigration regime, which would impose economic costs. “It seems unlikely they [the current government] would use the extra sovereignty in a way that would boost growth,” said Andy Goodwin, deputy director at the consultancy Oxford Economics.

Friction-free goods trade would, however, make this a much less costly outcome than a Canada-style agreement. Losing the ability to have an independent trade policy has minimal effect according to the government’s assessment.

However, if a new vote cast Brexit aside, economists inside and outside government think the outcomes would be the best available.

The total costs in the official analysis suggest the economy would be 2.2 per cent smaller in 15 years than if the UK had remained in the EU.

Remain in the EU single market and customs union

Under the Norway+ model advocated by MPs such as Nick Boles, Stephen Kinnock and Nicky Morgan, Britain would seek to remain inside the economic institutions of the EU, while leaving its political apparatus.

The UK would gain no new freedoms and by being part of the EU’s economic institutions, Britain would lose the ability to set its own migration and regulatory regimes but the economic analysis suggests this is a price worth paying. There would be no economic cost either in the short or long run.

Remain in the EU after a second referendum

Economists say the short-term economic outlook would be similar as under any of the negotiated outcomes described above. With transitional arrangements in place, the immediate uncertainty would subside and the differences would emerge over time. “This is all about kicking the can down the road,” said Daniel Vernazza, economist at UniCredit.

But some economists said a decision to hold a second referendum could, by contrast, depress economic activity in the short term. Kallum Pickering, economist at Berenberg, described it as the biggest risk to the outlook for this year, while John Wraith, a strategist at UBS, said any relief “would be offset by the drawing out of the intense uncertainty”.

However, if a new vote cast Brexit aside, economists inside and outside government think the outcomes would be the best available. Economists and officials think it would lead to more rapid growth in the next two years and avoid any longer-term hit to prosperity. – Copyright The Financial Times Limited 2019