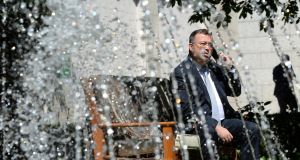 “For the first time in the history of our conference, we have a delegation coming from the industry in China,” Pat Lardner, chief executive of Irish Funds said. Photograph: Justin Farrelly

China’s gigantic $7 trillion funds industry is said to be looking at Dublin as a potential European base in the wake of Brexit.

A high-powered delegation of Chinese fund managers was in Dublin yesterday to scope out the potential for doing business here.

The delegation, which included representatives from several of China’s largest fund managers, attended an event hosted by Irish Funds, the trade body for the industry, which has also launched a guide to the Irish fund management industry for Chinese investors.

China is gradually opening up its financial markets to foreign investors, but vehicles for investing in assets linked to the Chinese economy are still limited for various regulatory reasons.

Dublin is viewed as a potential hub for Chinese funds because it already has a large, established funds industry. The city is now ranked as the third largest location for regulated investment funds in the world.

The uncertainty over whether UK will retain EU passporting rights after Brexit is also thought to be factor.

“For the first time in the history of our conference, we have a delegation coming from the industry in China,” Pat Lardner, chief executive of Irish Funds, told The Irish Times.

He said China represented a potential source of new business for the industry here, which already employs 15,000 people.

The was likely to involve the establishment of a regulated fund structure in a EU jurisdiction, he said.

“By coming to Ireland and establishing a fund in Ireland which is regulated, and subject to EU directives, that allows the fund to then be passported or sold in all other EU countries,” Mr Lardner said.

“In a nutshell, what it allows them to do is to grow and scale their international business by creating an effective way of distributing their products,” he said.

A mutual arrangement between the countries could eventually lead to Irish-domiciled funds being sold in China as investment managers there diversify their own portfolios, he added.

According to the Asset Management Association of China, assets under management rose 36 per cent to $7.54 trillion in 2016, albeit this represented a slowdown on the 86 per cent growth witnessed in 2015.

The Irish Funds event was attended by Taoiseach Enda Kenny, and included speeches from key personnel in BlackRock, Deutsche Bank, Credit Suisse and the Central Bank.

1 ‘No demand... because there are no people’ at well-known Dublin pub
2 HSE says fix for Covid Tracker app has been rolled out to all Android users
3 Nearly 30,000 could lose pandemic payment if they do not confirm eligibility
4 Buying a second home now that we work from home
5 Face masks developed in Ireland could help meat-plant workers
6 Shelbourne Hotel operator Marriott posts bigger-than-expected loss
7 UK criticised for ‘unforced errors’ on post-Brexit trade deals
8 Bank of Ireland in U-turn on refusal to reimburse ‘smishing’ victims
9 Unilever would scrap HQ move if Dutch ‘exit tax’ law enacted
10 Survey finds ‘huge appetite’ for remote working
Real news has value SUBSCRIBE