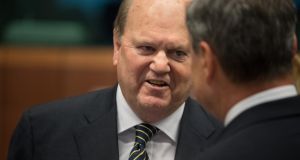 The European Investment Bank (EIB) is likely to play a key role in funding badly-needed infrastructural projects in Ireland, specifically in the areas of housing and transport, Minister for Finance Michael Noonan has indicated.

Speaking after a meeting of the Ireland-EIB financing group at the EIB’s headquarters in Luxembourg, Mr Noonan said he was confident the bank would intensify its consideration of projects crucial for Ireland’s future.

Mr Noonan said the bank was also examining support for sectors such as exporters and agriculture most affected by Brexit.

“The European Investment Bank has played a key role supporting transformational investment across Ireland for more than 40 years and both increased and broadened engagement in recent challenging times,” he said.

“We are anxious to grow Ireland’s social and economic infrastructure. We welcome clear progress to explore possible access to EIB funding for projects that are economically necessary,” Mr Noonan said.

The EIB has provided about €3.6 billion for investment in Ireland since 2010 with its Irish loan book expanding by about €600 million to €700 million a year, albeit this is still below the European average.

Its engagement with Ireland is, however, expected to increase following the appointment of Andrew McDowell, the Taoiseach’s former adviser, as the first Irish vice-president in 12 years, and the opening of the EIB’s first office in Ireland.

Mr Noonan was accompanied by Minister for Public Expenditure and Reform Paschal Donohoe for two days of discussions with EIB officials.

Over the course of this year the EIB is expected to be able to offer about €1 billion of new financing for projects across Ireland, including urban development, expanding port facilities, improving energy distribution, upgrading university facilities and construction of new social housing.

“Recent renewed efforts by Irish partners and EIB colleagues are ensuring that the EU bank’s unique technical and financial experience from successfully supporting infrastructure and business investment across Europe and around the world can benefit Irish projects,” Mr McDowell said.

“ This week’s meeting will ensure even closer co-operation to ensure that opportunities are not lost to unlock new investment that improves lives and opportunities in the years ahead,” he added.