Brexit: Traders could face €100 bill for every cross-Border transport

A protest has taken place against Brexit at the Old Customs Post at Carrickcarnon on the Dublin Belfast road. It is one of six being held along the border and is organised by the group Border Communities against Brexit. Video: Enda O'Dowd 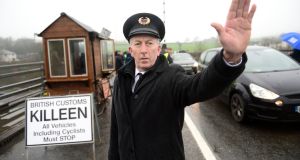 Businesses moving goods across the Border face a €100 bill as a result of Brexit. John McNamee is pictured at an anti-Brexit protest earlier this year. Photograph: Dara Mac Dónaill

Businesses moving goods across the Irish Border could be hit with a €100 charge as a result of Brexit, potentially adding hundreds of millions of euros in extra costs to firms involved in cross-Border trade, a customs expert has warned.

BDO partner Carol Lynch said there is likely to be a requirement to lodge customs declarations on all imports and exports in and out of the UK once it leaves the customs union.

“There is a necessary cost for this, either in the payment of a clearance agent or the recruitment of staff in addition to logistics related costs,” she told a meeting of the Oireachtas finance committee.

A reasonable estimate would be €100 per movement, Ms Lynch said. She said the EU’s chief negotiator Michel Barnier reiterated as much when visiting Ireland earlier this month.

Ms Lynch also noted there was a significant learning curve to ensure declarations lodged with customs were correct to ensure compliance, minimise risk of delays and avoid additional charges.

Based on current trade volumes, Fianna Fáil’s Michael McGrath calculated the reintroduction of customs on the Border could impose an additional €400 million in compliance costs on businesses involved in cross-Border trade, separate from any tariffs that might arise from the UK being outside the EU.

Mr McGrath asked Ms Lynch what sort of trade tariffs could businesses trading with the UK expect if Britain exited the EU without securing a free trade deal.

She said there was an average tariff of 3-5 per cent for most manufactured goods. However, this could rise to 40 per cent for certain agricultural goods, such as beef, she said.

Earlier, Revenue chairman Niall Cody told the committee the Revenue was not planning for the re-establishment of customs posts along the Border in the wake of Brexit.

“In the context of Revenue’s overall role and responsibilities, we are engaged in assessing the potential impact of Brexit for Irish traders,” he said.

“While we do not prejudge the outcome of the political negotiations, for practical reasons our planning is based on the full range of possibilities, including that customs controls or processes will apply between Ireland and the UK,” Mr Cody said.

He said Revenue data indicated that there were some 12,000 businesses in Ireland exporting to the UK, and over 60,000 importers.

In addition, an unknown number of businesses regularly move goods in transit across Northern Ireland and across the UK, Mr Cody said.

“Most of these businesses are unfamiliar with customs procedures, because at present customs controls do not apply to such movements,” he said.

“While it is not possible at this stage to provide detailed guidance, we are advising these traders and transport operators making long-term plans to assume that customs procedures of some form will apply post Brexit,” Mr Cody said.

Sinn Féin’s Pearse Doherty, however, claimed the Revenue was deliberately withholding documents given to various ministers in relation to the likely impact of a hard Brexit on cross-Border trade and the possible establishment of customs posts along the Border.

However, Mr Cody denied the Revenue was deliberately withholding documents from the committee but insisted some material was sensitive as it would inform the upcoming political negotiations.