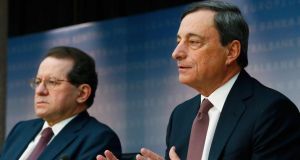 The European Central Bank warned there may be “excessive exuberance” in some European housing markets, driven in part by foreign buyers, that could spread to other areas in a “ripple effect.” Since 2010, house prices in European capital cities have risen far more than national averages, the Frankfurt-based central bank said in its financial stability review published on Wednesday.

Record-low interest rates have fuelled demand for residential properties as investors seek to buy assets that generate returns rather than depositing their money in banks.

The central bank said it is monitoring property-market developments closely and may top up national measures if necessary.

The ECB cited Berlin, Paris, Vienna and Amsterdam as cities that have performed particularly well. “Exuberant house price developments in certain regions could, in principle, threaten the stability of financial institutions with mortgage exposures concentrated in those regions,” the ECB said.

Meanwhile, Brexit will not derail the euro area’s economic revival and Britain has more to lose by quitting the European Union, according to ECB vice-president Vitor Constancio.

“Brexit can really not harm significantly the ongoing recovery in the euro area,” Mr Constancio said in interview posted on institution’s YouTube channel on Wednesday.

“Brexit is very significant for the UK, but in view of the relative size, it’s much less meaningful for the rest of the EU,” Mr Constancio added.

“Overall, the risk that the euro-area real economy would face restrictions in accessing wholesale and retail financial services following the UK’s departure from the EU appears limited,” the ECB said in the report.

Bundesbank board member Andreas Dombret has said that the biggest financial-stability risk a hard Brexit poses to Germany is a loss of access to London’s financial markets for German firms.

In its report, the ECB included statistics showing UK domiciled banks provide relatively limited services to non-financial firms in the euro area. They supply 1 per cent to 2 per cent of the external financing for the euro-area private sector.

Banks and other financial institutions should undertake any necessary preparations “in a timely manner,” the central bank said. Mr Constancio said Brexit makes the EU’s goal of creating a capital-markets union in the euro area “more necessary,” a position often voiced by policymakers including Valdis Dombrovskis, the EU’s financial-services policy chief, in the context of Brexit.

Financial stability risks in the euro zone are contained but remain significant and have even increased in some areas over the past six months, the ECB added.

The warning comes as the euro zone is enjoying its best economic run in a decade, raising expectations that the ECB could soon start to unwind its massive stimulus measures.

“Risks to euro-area sovereign debt sustainability have increased over the past six months,” the ECB said. “In recent weeks, however, euro-area spreads narrowed and sovereign stress conditions improved somewhat following the result of the presidential election in France.”

The ECB added that risks stemming from a further rapid repricing in global fixed-income markets are mostly related to spillovers from the United States but a prolonged period of elevated political uncertainty or higher-than-expected euro-area inflationary pressures could also act as triggers.

“Repricing risks in fixed income markets remain significant,” the ECB said. “There are . . . risks that euro-area bond yields could increase abruptly without a simultaneous improvement in growth prospects.”

The ECB singled out an upward revision of expectations for US interest rate hikes as a key risk and warned that a repricing of euro-zone bond markets could lead to substantial capital losses for investors.

Meanwhile, bank profitability is low and market valuations suggest no relief in sight even though market pressures have abated recently.

The ECB said Brexit – Britain’s forthcoming exit from the EU – is not one of its main stability concerns for the time being. – (Reuters and Bloomberg)