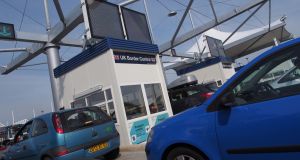 Cars driving through UK Border Control checkpoints at Calais ferry port in France. The risk is of Britain leaving the EU at the end of March 2019 with no agreement on what happens next. Were this to happen, customs checks would immediately be needed between Britain and the EU - including at the Irish border. 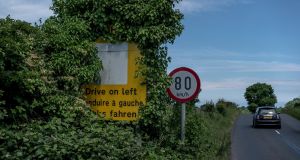 A sign at the border near Derry. If the UK were to leave the customs union without a new arrangement in place it will lead to new costs and bureaucracy for companies selling directly to Britain or exporting through Britain to the EU.

The British government’s first position papers on its approach to Brexit, published on Tuesday, is of vital interest to Ireland. It deals with the issue of the customs union, which sets the rules for trade in goods, and this is central to the future debate on the Border and also vital to companies here who trade with the UK . A separate paper on the Irish border and the North will be published on Wednesday.

What is a customs union and why all the fuss?

The EU customs union allows goods to move freely around the member states. This means that goods made in any one country can circulate freely and be sold in any of the other 26 member states without any border formalities, checks or special taxes. The customs union also allows goods coming in from outside the union to circulate freely, once they have cleared the customs checks and paid any tariffs the first time they enter the EU. It is thus a central and vital part of economic life.

What has the British government proposed?

Firstly, it proposes a transition period after the UK leaves the EU to give time for new trading arrangements between the two sides to be negotiated. During this period, Britain’s goal would be to keep trade arrangements as similar as possible to how they now operate. The second key part of the plan is a desire by Britain to maintain as free as possible trade with the EU in the long-term, after the transition period ends. This could be achieved, it says, by negotiating a permanent new customs union agreement with the EU, or by establishing customs borders, but having them as seamless as possible.

But this weekend all the talk was of Britain leaving the EU customs union and the need for a border on the island of Ireland?

Yes, and this may still happen. However, today’s statement is something of a victory for those in the British cabinet who support a softer Brexit. The document proposes that Britain would leave the EU customs union when it leaves the EU in March 2019, but that Britain sees one options as being a new temporary customs union between it and the EU that would then be put in place for a transition period of up to two years. There is more than a touch of semantics here to cover over the cracks in the British cabinet.

How would the transition period work?

The risk is of Britain leaving the EU at the end of March 2019 with no agreement on what happens next. Were this to happen, customs checks would immediately be needed between Britain and the EU - including at the Irish border. There would be a serious risk of disruption to trade as all this was sorted out. This is the so-called “ cliff-edge” Brexit.

The idea of a transition period - which London suggests might last around two to three years - is to give time after Britain leaves for the two sides to negotiate new trade arrangements for the long-term.

Could Britain not stay in the existing customs union, at least during the transition?

It could and it would make things a lot simpler. But for now it says it will not.There are political sensitivities here, particularly because of the “ Brexit means Brexit” group in the British cabinet. Britain also says that leaving the existing EU customs union would allow it to start negotiating trade deals with other countries - such as the US - during the transition period.

This is likely to be a delicate point with the EU negotiators. So would be the rules to operate during the transition period and in any permanent customs union. Britain is trying to retain the benefits of customs union membership while also having freedom to negotiate new deals and set its own rules - which the EU will see as looking to have its cake and eat it, too.

And then for the long term?

The British paper suggests that two possible routes could be explored. One would be a permanent new customs union between the UK and the EU. This would not be straightforward to negotiate, as EU producers would be wary in particular of access to their markets for goods coming from outside the union. London proposes special checks on goods coming through Britain which were intended to go on to EU markets, but it is not clear whether this is workable.Such a deal, Britain says, could reduce the need for customs formalities, but whether it could be negotiated is very questionable.

The second long-term option, the paper suggests, would be to reintroduce a border, but make it as “seamless and frictionless” as possible. A range of approaches are set out to try to cut the bureaucracy of customs and excise, though the document concedes that trade with the EU will not be as free as it now is. This would mean some kind of checks on goods crossing the Irish border, though the document says that London is committed to avoiding a “ hard Border” and to exploring additional measures to allow this.

Britain is expected to propose the continuation of the existing common travel area which would mean free movement of people across the Border would continue. These details are set to be released on Wednesday from London, and will be closely watched.

Where will Ireland stand?

Ideally, we would want the UK to stay in the existing customs union, removing the need for border checks on the movement of goods, but the document rules this out. Some kind of new customs union would be Ireland’s second choice, though whether this could be negotiated, whether it would cover all goods and whether some checks would still be needed are all open questions.

The worst outcome for Ireland is for the UK to leave the customs union and for no new arrangement to be put in place. This would mean a Border would return on the island and also leading to new costs and bureaucracy for companies selling directly to Britain or exporting through Britain to the EU.

The negotiators have agreed that progress is required on three key issues before talks on a new trade deal. These are “ Irish issues” - the border, the common travel area and the Good Friday agreement - the mutual rights of citizens, and the British financial exit bill. These will be the focus ahead of a key EU summit in October.