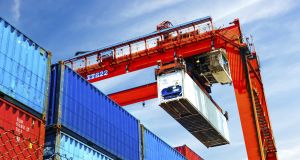 Despite fears of a major slowdown in Irish exports to the UK because of Brexit, the latest official figures point to a pick-up in trade with our nearest neighbour.

According to the Central Statistics Office (CSO), the value of exports to Britain has grown by 14 per cent to €7.2 billion so far this year.

The figures show exports to Britain rose by 15 per cent to €1.3 billion in June alone. The main increase was in the exports of chemicals and related products.

The value of Irish exports as a whole, however, fell by 8 per cent to €9.4 billion in June on foot of a big contraction in the value of “other transport equipment” exports, which include aircraft.

At the same time, Irish imports decreased by 3 per cent to €5.7 billion. The combined effect was to reduce Ireland’s trade surplus for June by 15 per cent to €3.6 billion.

The underlying trend still remains positive, however, with the value of goods exports for the first six months of 2017 up 7 per cent at €61.4 billion.

The largest decrease was in the exports of other transport equipment, including aircraft exports, which decreased by 90 per cent to €65 million in June.

Exports of food and live animals, meanwhile, increased by 26 per cent to €1 billion in June compared to the previous year.

Exports of medical and pharmaceutical products, the powerhouse of Ireland’s export trade, also increased by 14 per cent to €3.2 billion.

The EU accounted for €5.1 billion or 50 per cent of total exports in June, with Belgium accounting for the largest single share.

Antwerp is one of the largest global drug redistribution hubs and receives most of the State’s pharma exports which are not destined for the US. The US was the main non-EU destination, accounting for 26 per cent or €2.68 billion of total exports in June.

Imports of medical and pharmaceutical products increased by 129 per cent to €1 billion in June, while imports of road vehicles, which had jumped as a result of the current weakness in sterling, decreased by15 per cent to €317 million.

The UK’s looming departure from the EU poses a serious challenge to Britain and Ireland’s trading relations.

While the UK government is clear it will leave the EU’s customs union in 2019, it has proposed a continued close association for a time-limited period to minimise disruption and allow a smooth and orderly transition to the new arrangements.

From the UK government’s perspective, this period would involve a new customs union with no customs processes or duties between Britain and the EU, and a shared external tariff – Britain being able to pursue new trade agreements with non-EU countries during the interim period, although such deals would not be brought into effect until after the transition.