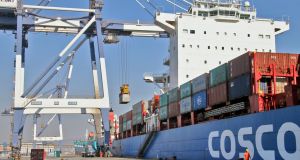 China’s economic growth dropped to its slowest annual rate since 1990 and was at its lowest level since the global financial crisis in the fourth quarter, as the US trade war and policy decisions in Beijing hit consumer sentiment and a decrease in capital expenditure.

Growth for the full year was 6.6 per cent, down from 6.8 per cent in 2017, and fell to 6.4 per cent in the fourth quarter, according to data released on Monday. Gross domestic product growth has slowed for three consecutive quarters, prompting concern among investors that the country could drag down the global economy.

China has adopted a series of fiscal and monetary stimulus measures since July that have failed to reverse the deceleration. Last week, the finance ministry outlined plans for additional tax cuts. US tariffs on Chinese exports have not directly inflicted major damage on the country’s GDP, according to the data.

But economists and corporate executives say the trade conflict has taken a heavy toll on sentiment, leading to a slowdown in consumer spending and capital expenditure.

“Aggregate data continue to portray a relatively benign picture that seems increasingly inconsistent with a sense of growing economic malaise and souring business, consumer and investor sentiment,” said Eswar Prasad, professor at Cornell University and former China head at the International Monetary Fund. “The government’s recent stimulus measures, although modest, would certainly seem to indicate that even policymakers are more concerned about the economy’s slipping growth momentum and are not taking the macroeconomic data at face value.”

Growth of retail sales, a gauge of consumer spending, ticked up in December to 8.2 per cent but remain near the 18-year low of 8.1 per cent touched in November. Ning Jizhe, director of China’s statistics bureau, on Monday sought to project confidence, noting that China’s growth was still far higher than the US, EU and Japan.

But he also acknowledged the trade war hit. “US-China trade friction indeed has an impact on economic performance...but we have overcome the overall influence,” he said.

The fourth-quarter GDP growth rate was in line with economists’ expectations, according to a Reuters poll. Full-year growth was down from the 6.8 per cent rate in 2017.

Beyond the trade war, analysts said the deterioration in economic expansion was at least partly self-inflicted.Beijing’s campaign to control financial risk by weaning the economy off its reliance on debt-fuelled stimulus contributed to a sharp slowdown in infrastructure spending, while also reducing access to credit for privately owned companies. A parallel effort to strengthen enforcement of environmental regulations fell heavily on private groups as well.

Tighter credit conditions in turn led to a record number of bond defaults last year. Some 45 issuers defaulted on 117 bonds with total principle worth Rmb110.5 ($16.3bn), according to Fitch Ratings. Among defaulters, 87 per cent were private companies.

Economists expect Beijing to ramp up stimulus measures in the coming months, including additional cuts to banks’ required reserve ratio. But experts also warn that previous rounds of heavy stimulus have left policymakers with less flexibility to loosen credit, which would further swell the economy’s debt burden.

“China’s economy is muddling through: slowing, but not realizing the worst fears about downside risks to the global outlook,” William Adams, senior economist at PNC Financial Services, wrote on Monday. “China’s government has throttled back on credit growth to contain financial sector risks, even at the cost of a cooler economy and despite the external shock of trade friction with the US.” – Copyright The Financial Times Limited 2019

1 The wealth of the Irish – how do your assets match up?
2 Irish company to test vaccines on volunteers deliberately infected with Covid-19
3 Dunnes Stores set to enter grocery delivery market
4 KBC Ireland fined €18.3m for ‘unconscionable’ tracker scandal role
5 Should I switch bank now with Ulster Bank at risk of closing?
6 Will Facebook walk away from European market after data protection 'hissy fit'?
7 Irish Fairy Door Company moves to licensing model
8 How to upgrade your home entertainment system for less
9 Dublin and Cork airports look at setting up pre-flight Covid testing centres
10 Eir takes on extra staff as ComReg chases it on complaints
Real news has value SUBSCRIBE