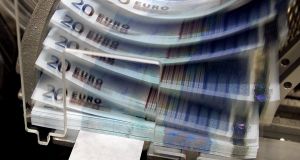 Irish households are the wealthiest they have ever been – at least on paper, according to the latest data from the Central Bank of Ireland.

Quarterly financial accounts from the bank show that the total net worth of Irish households stood at €800 billion at the end of last September. This equates to an average net worth per person of €162,577, the bank says, taking into account property and financial assets.

The €162,577 refers to a mean average, however, which may be considered a flawed measure of average wealth as it is susceptible to distortion by extremes at either end of the wealth spectrum.

According to the Central Bank’s data, Irish households became an average of 2.5 per cent richer over the three-month period to the end of September. This was driven by a total €11.5 billion increase in financial assets, such as the value of pension schemes, while housing assets increased by €8.2 billion over the quarter, to the highest level since the end of 2008.

Household debt now stands at a total of €135 billion, the lowest level since 2005. That is an average per person of €27,453, although again this mean average figure can be distorted by counting the very rich and the very poor.

The figures also show that the Government’s national debt fell by €1 billion over the quarter to the end of September to €232 billion. This means the State owes an average of about €48,000 for every man, woman and child.

1 Belgium helps Ireland to a Brexit boon
2 ‘My rent here is so low it’s a joke’
3 ‘Sad day’ for House of Ireland as tourism retailer goes out of business
4 This charming man: how Paschal Donohoe won the Eurogroup presidency
5 AIB to compensate another 1,100 tracker mortgage holders
6 Can Grafton Street stop the flood of closures?
7 New Powerscourt Springs hotel to open in defiance of virus gloom
8 Goodbody’s planned €155m sale to Bank of China falls through
9 FC Barcelona to pursue Nike for compensation over defective shirts
10 Ryanair accuses ‘screen scrapers’ of blocking refunds
Real news has value SUBSCRIBE