US economy adds 225,000 jobs in January as wage growth picks up

The unemployment rate ticked up slightly to 3.6%, from December’s 50-year low 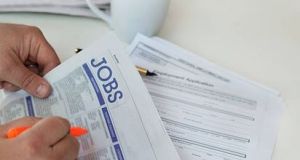 The US labour market adding more jobs than were forecast in January. Photograph: Getty Images

The US labour market started the election year in solid shape, adding more jobs than forecast in January and with wage growth pushing back above 3 per cent.

Non-farm payrolls increased by 225,000 in the first month of the year, according to data on Friday from the US labour department. That was up from December’s upwardly revised tally of 147,000 (previously 145,000), which was the fewest since May, and compared with the median forecast among economists for 160,000.

The unemployment rate went up slightly to 3.6 per cent from December’s 50-year low of 3.5 per cent.

Wages increased 3.1 per cent in January from a year earlier, an improvement after the annual rate of wage growth fell below 3 per cent for the first time since 2018 during December. That was better than economists’ forecasts for 3 per cent.

Futures for the S&P 500 were pointing to a 0.2 per cent drop at opening bell on Friday, roughly the same move anticipated ahead of the release of the data. – Copyright The Financial Times Limited 2020