US Fed cuts interest rates for first time since 2008

Cut of 0.25 per cent in line with expectations but smaller than Trump had demanded 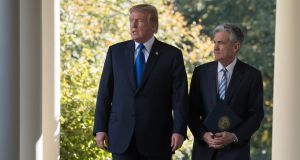 The US Federal Reserve cut interest rates on Wednesday for the first time since 2008, citing concerns about the global economy and muted US inflation, and signalled a readiness to lower borrowing costs further if needed.

Financial markets had widely expected the quarter-percentage-point rate cut, which lowered the US central bank’s benchmark overnight lending rate to a target range of 2.00 per cent to 2.25 per cent.

In a statement at the end of its latest two-day policy meeting, the Fed said it had decided to cut rates “in light of the implications of global developments for the economic outlook as well as muted inflation pressures”.

The Fed said it would “continue to monitor” how incoming information would affect the economy, adding that it would “act as appropriate to sustain” a record-long US economic expansion.

Both have raised doubts about a rate cut in the face of the current expansion, an unemployment rate that is near a 50-year-low and robust household spending.

On the opposite flank, US president Donald Trump is likely to be disappointed the Fed did not deliver the large rate cut he had demanded. Trump has repeatedly harangued the central bank and Fed chairman Jerome Powell for not doing enough to help his administration’s efforts to boost economic growth.

Powell and other Fed officials in recent weeks have walked a middle ground, flagging risks like continued uncertainty on the global trade front, low inflation and a weakening world economy, but repeating the view the United States is fundamentally in a good spot.

The Fed said in its statement that it continued to regard the labour market as “strong” and added that household spending had “picked up”. But it noted that business spending was “soft” and that measures of inflation compensation remain low.

The Fed said the rate cut should help return inflation to its 2 per cent target but that uncertainties about that outlook remain. Sustained expansion of economic activity and a strong labour market are also the most likely outcomes, the Fed said.

Underscoring its decision to ease policy across the board, the Fed also said it would stop shrinking its massive holdings of bonds starting on August 1st, two months ahead of schedule. – Reuters

1 Will your boss let you work long-term from home – or from abroad?
2 Plans for €2bn Dart expansion lure Bombardier to Dublin
3 Only half the homes needed this year will be built, construction event told
4 AA Ireland bought by Olivier Sarkozy-led fund for more than €240m
5 Revolut shifts regulation of Irish customers to Lithuania
6 McGuinness faces Brexit and Covid grilling at parliamentary hearing
7 Subway bread too sweet for the Irish tax authorities
8 Press Up’s asset diversity is its Achilles’ heel
9 Not just another brick in the wall
10 Google tells workers to return to country where they are employed
Real news has value SUBSCRIBE