As with Anglo, Carillion’s failure shows if auditors take their eye off the ball ordinary people suffer 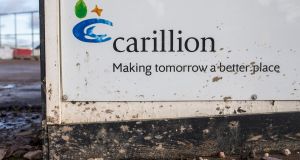 The Carillion logo on hoarding at the Midland Metropolitan Hospital construction site in the UK. Photograph: James Beck/Bloomberg

There’s never a silver lining when a company fails, not to mind one that once reported revenues of more than £5.2 billion (€5.9 billion). As with the recent collapse of construction company Carillion, an awful lot of people are likely to be left out of pocket, while its workforce of almost 20,000 people could be out of a job.

Another big loser in Carillion’s collapse is accountancy firm KPMG, which has collected fees from the company of £29.4 million (€33.3 million) since the UK-based entity was established in 1999.

Last week, the UK’s Financial Reporting Council (FRC) signalled it was gearing up to take a closer look at what happened with Carillion after KPMG signed off on the company’s books only 10 months ago.

This very public failure has, once again, highlighted the difficulty with private accountancy firms carrying out an important public function. On the one hand, the firms have to ensure survival by charging fees. With that at the forefront of their minds, they have to maintain good working relationships with the companies for whom they are working.

On the other hand, they have a public function to adequately assess and present the real picture of a company’s finances. Balancing the two requirements can prove difficult, however.

While we await any FRC’s findings on the auditing of Carillion, the issue does underline that when the warning flags aren’t waved by auditors there are real social consequences. We needn’t look farther back than the collapse of Anglo Irish Bank.

In Carillion’s case, the suffering may well be confined to the employees and contractors, while the Anglo failure had more far-reaching consequences. In both cases, though, auditors had approved the books.

While the ultimate risk to auditors is the collapse of their own firm, as happened with Arthur Anderson globally following the Enron scandal, perhaps there need to be stiffer penalties than just reputational damage if accountancy firms get it wrong.