Ireland to have more significant role in Europe post-Brexit

Republic will act as a ‘gateway to Europe’ when UK leaves, US Chamber president says 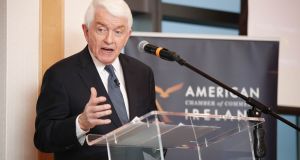 Ireland will take on a more significant role in Europe if Brexit proceeds as planned, the chief executive and president of the US Chamber of Commerce has said.

“Ireland has been a very attractive location for US investment. It’s a gateway to Europe,” said Thomas Donohue speaking in PwC at an American Chamber of Commerce Ireland event.

Mr Donohue added that the US invests more money in the Republic than in “lots of other bigger, more central, locations”, noting that in 2016, Ireland attracted 12 per cent of US foreign direct investment despite accounting for just 1 per cent of the European economy.

Feargal O’Rourke, PwC managing partner, was less positive on Brexit, saying that it’s “not good for Ireland as an overall position”. However, he conceded that US companies looking to expand into Europe are unlikely to consider the UK as a location for any European headquarters.

In the past year, the new US administration under president Donald Trump has withdrawn from the Trans-Pacific Partnership (TPP) and is seeking to renegotiate the North-American Free Trade Agreement (NAFTA). Mr Donohue noted these moves weren’t to close the US off to global trade. “We’re not going to close up Nafta, we’ll change it. We’re not going to stop trading, we’ll expand it. We’re going to work together and see what we can do to resurrect our plans in the Pacific,” he said.

On a trade agreement with the EU, Mr Donohue suggested that deepening trade and investment ties between it and the US were crucial. “The American and European economies are so interdependent that we both must be successful or neither will be.”

Mr O’Rourke backed up the assertion saying: “When the US is strong, Ireland benefits disproportionately.”

While changes in the US tax code have caused some concern in the Republic, Mr Donohue said the tax overhaul took inspiration from Ireland. “Ireland has the gold standard...your gold standard is something that required a great deal of courage. When you look very carefully you’ll find a lot of things we copied from you guys.”

He noted that president Trump’s policies have been good for US business, although, he said immigration was key to ensuring the US economy remains competitive, particularly with regard to the requirement for infrastructure investment. “The bottom line is if we don’t have the people, we can’t do the work,” he said.