Jysk is the latest Scandinavian group to target the market here, with plans for up to 40 stores 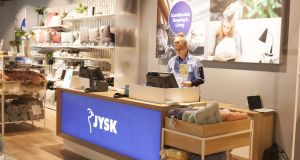 Danish retailer Jysk is planning to up to 40 stores in Ireland.

As Danish homewares group Jysk announced that it would open seven more stores across Ireland in the first half of the year, the creeping influence of Scandinavian companies on the Irish retail sector grew a little.

More than 1,000 years after the Vikings first invaded Ireland, a plethora of Scandi retailers have landed on Irish shores in recent years and most appear to be doing well here.

Several were in the apparel sector, such as Cos and & Other Stories, both ultimately owned by Swedish fashion behemoth H&M. Danish jewellery chain Pandora has also expanded heavily here, as has the knick-knacks and accessories retailer Flying Tiger Copenhagen via a franchise arrangement.

But it is in the homewares and furniture market segment where Irish consumers appear most taken with Scandinavian styles, their cool minimalist and unfussy design philosophies resonating in the post Celtic Tiger era.

The first big Scandi entrant was, of course, the Swedish furniture giant Ikea, which opened its first store in Ballymun 11 years ago this week. Despite opening in the wake of the one of the biggest property crashes in history, the furniture retailer’s first Irish outlet soon became one of the busiest in its global network.

Sostrene Grene, a Danish home furnishings group that operates here as a 50/50 joint venture with a local investor, now has six stores in Ireland, with plans for more. Its compatriot, Jysk, which is seen as a Danish version of Ikea, ultimately plans up to 40 Irish stores.

Traditional retailing in Ireland faces multiples challenges, with the ongoing migration to online shopping perhaps the biggest threat. To counter this, many retailers now look at their stores as experiential bases, rather than simply as emporiums to purvey goods.

Scandinavian retailers are experts at this sort of thing. Ikea, for example, is known for its food as much as the furniture. Sostrene Grene outlets, with their classical music and emphasis on creativity and arts and crafts, are exhibition spaces as much as they are stores.

As the industry grapples with creative ways to halt the decline of traditional retail stores, expect Scandinavian values to become even more influential.