Australia is no longer the lucky country 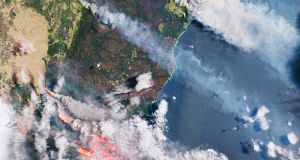 The fires could rage in Australia for a couple more months. But the greater fears must be longer term.

The book The Lucky Country was written about Australia in the 1960s, and since then the label has stuck. For anyone slogging their way through a British winter, the image of Australians on the beach seemed impossibly alluring. On my first visit to the country, 25 years ago, a Sydneysider teased me: “You guys used to deport your convicts here. Now what do you think?” Naturally, we were sitting outside at a barbecue with beers in our hands.

In the decades afterwards, Australia’s luck seemed only to improve. Asia’s boom created huge demand for the country’s commodities. For the past three decades, Australia has not suffered a single recession - a unique record in the developed world. With a population of just 25 million to share the riches of an entire continent, prosperity seemed guaranteed long into the future. While the US and the UK fretted about the erosion of middle-class lifestyles, the “Australian dream” powered ever onwards.

But by participating so eagerly in the mining boom, Australia might also have been helping to dig its own grave. Fossil fuels are driving climate change; and, as the government now accepts, global warming is a major factor behind the fires, water shortages and record temperatures that are ravaging the country.

The statistics of homes destroyed and lives lost are tragic but do not, in themselves, suggest that a whole society is at risk. Some 27 people have so far been killed and more than 1,800 homes have been lost. But the ecological toll is horrifying.

In the state of New South Wales alone, it is feared that more than 1 billion animals may have been killed by the fires or have had their habitats destroyed, including a third of the state’s koalas - devastating an animal that has become a symbol of the country and its unique wildlife. The coral of the Great Barrier Reef, another of Australia’s great natural wonders, has already been severely damaged by climate change.

The fires have not ravaged the major urban areas, where the majority of Australians live. But daily life has been severely affected by the haze from the fires. Air quality in Canberra, the federal capital, was for a while the worst in any city in the world, causing the national art gallery to close, postal services to be suspended and some embassies to shut down. In Sydney last week, pools and tennis courts, those symbols of an Australian summer, were also temporarily closed. There is anxiety about the Australian Open - the first grand slam tennis tournament of the year - which is due to start in Melbourne on January 20. (Last year play had to be suspended for a time because of extreme heat, which touched 44C).

Australians, who used to look forward to the summer, are beginning to dread it - both because of the heat and because of the foreboding about the future that it inspires

The fires could rage in Australia for a couple more months. But the greater fears must be longer term. Average temperatures in Australia are rising, with successive summers setting new records. Last year was the hottest and driest in the country’s recorded history, with rainfall 40 per cent below average. Australians, who used to look forward to the summer, are beginning to dread it - both because of the heat and because of the foreboding about the future that it inspires.

But these fears are by no means universal. The last Australian election saw a victory for rightwing parties which had pooh-poohed the need for drastic action on climate change, portraying climate activism as a fetish of rich urban liberals, happy to deprive ordinary Australians of their jobs, pick-up trucks and Sunday roasts.

The political right’s complacent stance about climate change, along with a series of errors, has led to a backlash against Scott Morrison, the prime minister, who once waved a lump of coal around in parliament, urging his audience not to be frightened of the stuff. But the fact that Australia is still so dependent on coal for its energy generation and exports no longer seems like something to laugh about. The country’s go-slow approach to international climate negotiations also looks increasingly like an act of self-harm, rather than a shrewd defence of the national interest.

The government responds to its critics by pointing to an inconvenient truth. Australia accounts for just 1.3 per cent of global carbon emissions. If you include the country’s coal exports in the calculation, the figure rises to 4 per cent. Still, it is clearly true that Australia could shut its entire coal industry down without having a transformative impact on global emissions.

Australians who want to see the country take more urgent action respond that if even rich Australia fails to change its ways, it cannot expect countries with lower living standards, such as China, to rein in emissions. That may well be true. On the other hand, even if Australia does take action, there is clearly no guarantee that others will follow its example.

In their different ways - and for understandable reasons - Australian climate activists and their opponents are indulging in forms of wishful thinking. Conservatives argue that the facts around climate change are still contested and that nothing much needs to change. Those on the left argue that if the country summons up the will to take drastic action, it can make the future less threatening. But this Australian summer suggests that the future may already have arrived. And it looks frightening. – Copyright The Financial Times Limited 2020