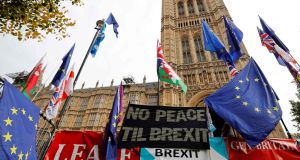 A Brexit protest outside the UK parliament. The EU on Monday agreed to a Brexit extension until January 31st. Photograph: Getty Images

Political advances on Brexit helped improve the mood among businesses in October, but wasn’t enough to lift consumers out of their gloom, the Bank of Ireland Economic Pulse survey has found.

The index was “a touch firmer” in the month as the risk of a no-deal Brexit on October 31st receded.

The Government’s cautious approach to Budget 2020 formed the backdrop to the month’s survey alongside Brexit developments, which included the agreeing of a deal between Brussels and Westminster.

“The survey findings suggest that households aren’t overly convinced by recent developments though, with consumer sentiment tracking lower again this month and one in two indicating they are holding out on spending,” said Loretta O’Sullivan, group chief economist for Bank of Ireland.

“However, there was a sense of relief among firms that a Halloween crash-out was increasingly unlikely and business sentiment edged higher,” added Dr O’Sullivan. “That said, the mood remains relatively subdued overall reflecting the fact that there is no such thing as a good Brexit outcome.”

The EU on Monday agreed to a Brexit extension until January 31st.

The consumer element of the index dropped for the fourth consecutive month to a fresh low, with half of households surveyed saying they were holding on out spending decisions.

Households were gloomier about the economy and their own finances, with buying sentiment also taking a knock as Brexit weighed on minds and Budget 2020 did little for consumers’ pockets, Bank of Ireland said.

Just a quarter of those surveyed considered it a good time to purchase big ticket items such as furniture and electrical goods, which was down from a third in September. One in two indicated that they were holding out on spending because they are not certain which way economic policy is going to go.

Meanwhile, a third of companies surveyed said they expected to increase basic wages over the next 12 months by 3.6 per cent on average in light of a tightening labour market.

Sentiment was mixed across sectors, with confidence among services and construction businesses gaining ground, but retail and industry slipping back.

Business growth ambitions are holding steady, Bank of Ireland said, with three in five companies planning on expanding in the next 12 months to three years.

The Bank of Ireland Economic Pulse survey is conducted in conjunction with the European Commission, with the data feeding into the EU Commission’s Europe-wide sentiment study.