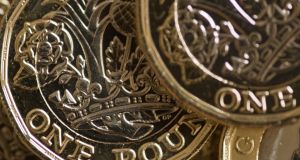 The pound rocketed as much as 2.5 per cent versus the dollar to $1.3516 – its highest since May 2018 and putting the British currency on course for its biggest one-day gain since January 2017. Photograph: iStock

The British pound surged on Thursday, hitting its highest levels against the euro since shortly after the 2016 Brexit referendum as prime minister Boris Johnson’s Conservative Party looked on course for a big parliamentary majority.

Investors, chastened by 3½ years of political instability in Britain, have seized on the likelihood of a decisive Conservative majority, believing it will arm Johnson with the political strength to push ahead with getting Britain out of the European Union at the end of January.

“Just as Boris Johnson was desperately seeking his majority, this result would give the markets their ultimate wish: clarity,” said Dean Turner, Economist, UBS Wealth Management.

The exit poll survey showed Mr Johnson’s Conservatives would win 368 seats, more than enough for a comfortable majority in the 650-seat parliament and the biggest Conservative national election win since Margaret Thatcher’s 1987 triumph.

If the exit poll is accurate and Mr Johnson’s bet on a snap election paid off, he will move swiftly to ratify the Brexit deal he struck with the EU so that the United Kingdom can leave on January 31st – 10 months later than initially planned.

The pound rocketed as much as 2.5 per cent versus the dollar to $1.3516 – its highest since May 2018 and putting the British currency on course for its biggest one-day gain since January 2017.

Against the euro, sterling hit as high as 82.80 pence , up 2 per cent on the day, and leaving the pound back at levels last seen in July 2016, shortly after the Brexit referendum that hammered the currency. The pound traded around 76 pence per euro before the June 2016 Brexit vote.

“Sterling has moved aggressively. I would anticipate we would get a decent rise in UK equities in the morning too,” said Peter Kinsella, Global Head of FX Strategy at UBP.

He said the move was a “relief rally” that the Labour Party under Jeremy Corbyn was highly unlikely to win and reflected the size of the majority the Conservatives now looked set to claim.

The pound could move towards $1.37 in the coming weeks as investors who have underowned UK assets for the past few years return, Kinsella added.

Trading volumes in the pound tend to be relatively light in Asian hours, but traders at banks and investment firms are working through the night as results of the election trickle in, with the bulk of individual parliamentary seats to be declared between 3am and 5am Irish time.

Broader global markets rallied on Thursday, boosted by both the likely UK election result and reports a last-gasp trade deal had averted new US tariffs on China.

Political uncertainty has weighed heavily on the pound and dogged the performance of British assets since the referendum as investors fretted about the damage a departure from the EU would cause the British economy.

Markets’ enthusiasm for a Conservative victory under Johnson contrasts with a few months ago, when sterling sold off heavily as investors worried Britain was headed for a disorderly and economically damaging no-deal exit from the European Union under his leadership.

But Mr Johnson subsequently secured a new agreement with Brussels and then called a snap election after accusing parliament of frustrating his plans.

The face of the “Leave” campaign in the 2016 referendum, Johnson fought the election under the slogan of “Get Brexit Done”, promising to end the deadlock and spend more on health, education and the police.

The opposition Labour Party has promised the public a second Brexit referendum.

“The biggest hope from an economic perspective will be clarity over Brexit in the near term, which should prompt a modest recovery in activity,” said UBS’ economist Mr Turner.

“However, Brexit isn’t yet really ‘done’, and attention will quickly turn to the future trade relationship. This phase looks set to be every bit as difficult as the last, with just over 12 months until the transition period ends on 31 December 2020.” – Reuters