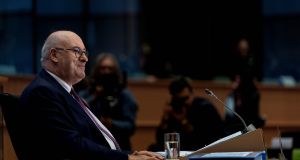 EU trade commissioner Phil Hogan: ‘It is unacceptable that the EU cannot enforce its rights through adjudication’. Photograph: Kenzo Tribouillard/AFP

The EU’s trade policy chief has vowed that Brussels will still be able to hit other countries’ exports with punitive tariffs despite the partial collapse of the World Trade Organization’s dispute-settlement system.

Phil Hogan said that the EU would toughen its own laws in response to the loss of the WTO’s appellate body, which, as of this week, is no longer able to hear cases because Washington has blocked the appointment of new judges. The body is the highest authority in the 164-member organisation for arbitrating disputes.

The proposed EU legal changes would empower Brussels to impose additional tariffs in situations where a WTO dispute-settlement panel has ruled in the EU’s favour, but the losing country then appeals the case to the non-existent appellate body.

Mr Hogan said that countries could be tempted to “appeal into the void” in this way as a stalling tactic.

The EU trade commissioner, who took office at the start of this month, said that such a move would normally force the EU to suspend any retaliatory action against the country, tying Brussels’ hands despite its companies facing unfair competition.

“It is unacceptable that the EU cannot enforce its rights through adjudication”, he said. “The EU’s economic interests are left unprotected.”

Brussels insists that the step is legal, but expects it to come under fire from other WTO members given that the organisation’s rules require countries to wait until dispute-settlement cases have run their full course before taking retaliatory action.

The move by the EU underlines the difficulties the bloc faces in its efforts to salvage the WTO, which the EU has argued needs to be comprehensively reformed in order to stay relevant. The international organisation has been buffeted by US president Donald Trump’s aggressive use of punitive tariffs against China and other economies – measures the US claims are allowed under WTO rules – and by Beijing’s model of state-sponsored capitalism.

Washington has longstanding complaints about the appellate body that predate the Trump administration, arguing that it has over-reached its mandate and interfered with national law.

Mr Hogan said the EU’s new retaliatory powers would be tightly tailored, and would only apply to countries that had refused to co-operate with the bloc in setting up alternative interim arrangements to replace the appellate body. So far, only Canada and Norway have signed agreements with Brussels on such measures.

The collapse of the appellate body means that 10 cases have been suspended, including a Russian complaint against EU energy market rules. But Brussels fears a growing backlog over time.

Mr Hogan’s proposals also include measures to stop countries blocking dispute-settlement arrangements set out in bilateral trade deals with the EU. EU officials said the commission wanted to ward off the risk of governments finding ways to stall such cases through tactics such as refusing to appoint or pay arbitrators.

Brussels was annoyed recently by the length of time it took to get a panel appointed to adjudicate a dispute with South Korea over whether Seoul was living up to labour market commitments it made under its trade agreement with the EU.

Mr Hogan’s proposed legal changes require approval from the European Parliament and from national governments before they can take effect, something Mr Hogan hopes will happen by mid-2020.

The steps wee about “enforcing the EU’s rights in international trade”, Mr Hogan said. “I hope the council and parliament can adopt the amendment as a matter of urgency.” – Copyright The Financial Times Limited 2019