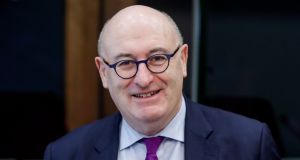 European trade commissioner Phil Hogan: “This is a regrettable and very serious blow to the international rules-based trade system”

The decision to close the appeals mechanism of the World Trade Organisation has been deplored by the EU trade commissioner, Ireland’s Phil Hogan. The appellate body will stop functioning as it is no longer able to take on any new appeals because the Trump administration in the US is refusing to appoint new judges to the court.

“This is a regrettable and very serious blow to the international rules-based trade system,” Mr Hogan said in a statement. “For the past 24 years it has relied on the WTO’s appellate body – and dispute settlement generally.

“This is a critical moment for multilateralism and for the global trading system. With the appellate body removed from the equation, we have lost an enforceable dispute-settlement system that has been an independent guarantor – for large and small economies alike – that the WTO’s rules are applied impartially.”

In the absence of the mechanism Mr Hogan will on Thursday announce additional interim measures for those partners willing to co-operate with the enforcement of WTO rules “to make sure that the EU can continue to enforce its rights in international trade matters should others block the system”.

Mr Hogan also reiterated the need for a comprehensive reform of the WTO system.

“A comprehensive package of reforms needs to be implemented right across the WTO’s three functions: as a producer of trade rules, as a monitor of countries’ trade policies and practices, and, not least, its dispute resolution function.

“The EU has been at the forefront of this process, making detailed proposals and engaging constructively with our WTO partners, and will continue to do so.”