Draghi says Europe must pull together as Trump targets WTO

EU will toughen own laws to counteract loss of WTO’s appellate board, says Phil Hogan 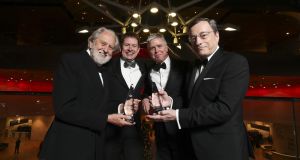 Mr Trump’s administration effectively shut down the World Trade Organisation’s appeals court, which has the final say on disputes covering billions of dollars of international trade, on Wednesday by blocking appointments to replace two judges on the so-called appellate body.

“At its core, the global system still depends on the willingness of the most powerful states to voluntarily accept constraints on their freedom of action,” Mr Draghi said as he received a Business & Finance award in the name of the late Peter Sutherland, who was instrumental in setting up the WTO and became its first director general in 1995.

“That willingness is not infinite, a fact we are seeing displayed today in the facing of the WTO appellate court.”

Speaking on the day his successor, Christine Lagarde, presided over her first European Central Bank monetary policymaking meeting, Mr Draghi said the WTO problems “throw into sharp relief why the European project is so unique and important”. He didn’t mention Mr Trump in the speech.

The difference between the EU and global bodies is that the union’s institutions “represent a genuine sharing of sovereignty in which all countries, small and large, have the same rights”, Mr Draghi said, adding that when challenges arrive “gradual improvements” are made.

Mr Draghi said that the euro itself was created to prevent competitive devaluations that undermine open trade, while banking union was set in motion in the wake of the financial crisis.

“The challenge for Europe is to extend this logic to completing economic and monetary union more broadly, in particular finishing banking union and deepening fiscal union,” he said.

“Progress will inevitably be slow and hotly debated. But the evolution from single market to single currency to single banking and fiscal union is, in reality, a logical extension of the aspiration in Europe to make openness among nations sustainable.”

EU trade commissioner Phil Hogan said on Thursday the union would toughen its own laws in response to the loss of the WTO’s appellate board. His proposal would allow the EU to impose sanctions against countries that illegally restrict commerce and simultaneously block the WTO’s dispute-settlement process.

“It’s unacceptable that the EU cannot enforce its rights through adjudication,” Mr Hogan said at a press conference in Brussels. “Our actions today are fully compatible with international public law.”

The EU is asserting itself more in a bid to prevent Mr Trump’s America-First agenda and protectionism from undermining the rules-based global order to which Europe is committed.

Over the past three years, Mr Trump has angered Europe by hitting its steel and aluminium with tariffs based on controversial national-security grounds, dangled the threat of similar levies on foreign cars and drawn up plans to target French goods with levies as retaliation over a digital tax in France.

Meanwhile, Mr Trump tweeted on Thursday saying a deal with China to pause the trade war between the world’s two largest economies was “very close”. The statement comes just days before the US is due to impose another round of tariffs on Chinese goods. – Additional reporting, Bloomberg