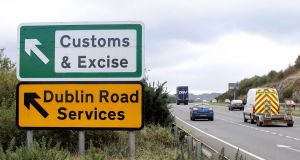 The chamber said cross-Border businesses are particularly exposed to divergent approaches from the two jurisdictions in Ireland, which “may lead to confusion at best or misinterpretation at worst”.

The British Irish Chamber of Commerce says the different approaches adopted by the two governments to mitigating the economic effects of Covid-19 is “unhelpful” to business and it called for an all-island approach.

The chamber said cross-Border businesses are particularly exposed to divergent approaches from the two jurisdictions in Ireland, which “may lead to confusion at best or misinterpretation at worst”.

“We now have a situation where one member firm located on both sides of the Irish border are now receiving two distinct messages and instructions from their political leaders,” said John McGrane, director general of the chamber.

Both governments have stepped up anti-virus restrictions imposed on citizens and businesses in the last 24 hours, significantly so in the UK’s case. The chamber welcomed both sets of business support measures but called for greater co-ordination.

“Our call is simple, it would be helpful to businesses if both the UK and Irish governments adopted a similar approach in their responses to this shared challenge,” said Mr McGrane.

Trade between the Republic and the UK is worth €1.5 billion per week, the chamber said.

“Given the interdependence between both economies and considering the Common Travel Area and our invisible border between north and south, the idea that Ireland and the UK are responding differently to the same challenge is unhelpful for businesses and their employees.”