A real ‘National Government’ will be needed if things turn nasty 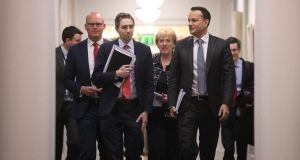 Covid 19 had put paid to the post election political manouvering to form the next government. It has, like politics itself, been put to sleep. The bruised egos and bitterness left by election 2020 and the rise of Sinn Féin have been left behind.

Hardly a surprise then that two prominent politicians, Fianna Fail’s Jim O’Callaghan and the Green Leader Eamon Ryan, have surfaced the prospect of a National Government being formed.

Given the worsening crisis caused by the Corona virus Fine Gael sympathisers have suggested that the current caretaker administrationed lead by Leo Varadkar is in effect a ‘National Government’. The fact that there is no public appetite for political infighting does not mean we have a national government. If the crisis gets worse then a government with a strong mandate is required. Some further and very unpalatable choices will have to be made. There is no certainty that consensus can be maintained if the health service is on the edge of collapse.

But the suggestion that the caretaker government is in effect a national government is given credibility by the virtual disappearance of both Mary Lou McDonald and Micheál Martin from the news. Leo Varadkar, Paschal Donohue, Simon Harris and Simon Coveney have grabed the microphone.

The simple truth is that the crisis deserves a national government approach but the lack of urgency about coalition talks means an equally viable solution is to leave the caretaker government in place rather than bring in a whole new raft of ministers to handle the crisis. A genuine national government would include Fianna Fail, Sinn Féin and fine Gael. This would give due recognition to the impulse for stability and change. In any event Sinn Féin’s costly giveaway promises will have to be shelved given the enormous spending requirements of staving off economic collapse. The two big issues of the election were housing and health. Health by definition will be getting far more attention and investment. The impact of Covid 19 will be to drastically slow down growth in house prices and the cost of renting.

One way or the other Leo Varadkar has played himself back onto the pitch following Fine Gael’s bad defeat in the general election. He has also played a poor hand well since the election by suggesting his party was destined to be in opposition whilst Fianna Fail’s Micheál Martin continued his foolish attacks on Sinn Féin in the aftermath of the election. Now Martin has little or no choice on coalition formation - form a full coalition with Fine Gael or keep them in power as a minority government for longer . Nobody can risk an election in the current atmosphere.

The current consensus is appropriate as we face into the massive headwind of the Covid 19 virus. However it would be arrogant for anyone in public life to presume that support for a minority government can be sustained if Ireland begins to experience rapid growth of the virus as seen in Italy and Spain. This could easily strain public patience when doubled up by huge job insecurity and company closures.

People marvelled at how Ireland weathered the financial meltdown of 2008 without seeing a breakdown of public order and mass scale civil disobedience. The water charges campaign was for the most part passive resistance rather than outright attack. The same cannot be guaranteed if the public experiences a simultaneous collapse of incomes against the background of a stealthy progression of the virus and infection rates. As with the financial crisis there is a strong reward for moving swiftly and from a position of governmental strength. There are talented people in Fianna Fail, Sinn Féin and Fine Gael. They should now step up to the plate. There will be no backlash if they put their bickering aside and form a national government .