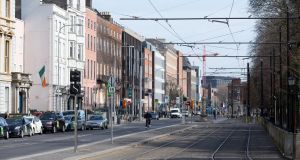 It is hoped that this scheme will keep as many people as possible on the payroll, amid fears that the spike in unemployment could be worse than previously expected. Photograph: Tom Honan/The Irish Times.

The Government’s €3.7 billion package to ease the fallout from the Covid-19 pandemic will “play a crucial role in enabling the economy to bounce back” at the end of the crisis, business group Ibec said.

The Irish Congress of Trade Unions (Ictu) also welcomed the new wage subsidy scheme, announced on Tuesday afternoon by Taoiseach Leo Varadkar alongside an increase in the Covid-19 emergency payment to €350 a week.

The measures are essential to prevent an economic depression, said Patricia King, general-secretary of Ictu.

“These wage subsidies will help put workers’ minds at ease and enable them and their families to meet the immediate challenge at hand - beating Covid-19,” she said.

“We reiterate that the business community stands ready to support whatever measures are required to address this unprecedented health challenge,” said Ibec chief executive Danny McCoy.

The business body also welcomed the confirmation that some manufacturing and other necessary services can remain open if they adhere to social distancing guidelines.

Alongside new public health measures designed to slow the spread of the virus, Mr Varadkar outlined the ways in which the Government will assist people financially through the pandemic.

The new 12-week wage subsidy scheme, which will see the State pay 70 per cent of employees’ wages up to a cap of €410 per week, will be available to employers who suffer a minimum of 25 per cent decline in turnover or an inability to pay normal wages or other outgoings as a result of coronavirus.

It is hoped that this scheme will keep as many people as possible on the payroll, amid fears that the spike in unemployment could be worse than previously expected. Minister for Social Protection Regina Doherty said at the Government’s press briefing that her earlier estimate that 400,000 people would lose their jobs now looked “conservative”.

However, Minister for Business Heather Humphreys said “keeping that crucial link between the employer and the employee” would put the State in a better position to recover from economic shutdown, while Minister for Finance Paschal Donohoe said it was necessary to “act now to avoid an even greater economic challenge in the future”.

The €350 a week Covid-19 Pandemic Unemployment Payment can also be claimed by self-employed people affected by the crisis.

Small Firms Association director Sven Spollen-Behrens said this was important as self-employed people were “experiencing a significant loss of income”.

Ms King said Ictu would work with the Government and employers to confirm that the scheme supports all affected workers and ensure that employers pay the remaining 30 per cent of workers’ pay.

The Restaurants Association of Ireland also welcomed the new measures, including the instruction that cafes and restaurants should move to take-away and delivery options only. It has been urging such an instruction over the past week to protect staff and customers.

The association said it had some concerns about the wage subsidy scheme, saying further clarification was needed about how businesses qualified.

The Irish Hotels Federation (IHF) said the new measures were essential, but were “not nearly enough” to safeguard the future of the tourism sector, which would require specific assistance.

“Revenues plummeted by up to 100 per cent across the sector with a catastrophic impact on cashflow. We are calling again on the Government to reduce the rates of tourism VAT and employer’s PRSI to zero until we see a recovery.”