Coronavirus: Creches will not ask parents for fees after deal with State 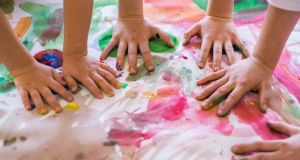 The supports, which the Department of Children and Youth Affairs (DCYA) has told creche owners “are specific” to the sector, are currently being finalised. Photograph: iStock

Parents will not be asked to pay creche fees for up to three months under a government scheme that will see childcare worker wages topped up beyond the 70 per cent level announced for others.

The Department of Children and Youth Affairs will reimburse childcare providers a further 30 per cent on top of the scheme announced earlier today, which will see the Government pay 70 per cent of a workers salary up to €410 per week, The Irish Times has learned.

Due to the low average wage of the childcare sector, the move in effect means the State is agreeing to pay all wages of creche workers for the next three months. In return, Minister for Children Katherine Zappone, who has been working on the scheme since the outbreak of the Covid-19 epidemic, will tell childcare providers they cannot charge parents from this month onwards.

Furthermore, creches will be expected to assure parents that their child’s places will be secure at the end of the crisis, providing that the creche is still trading. Creches which have let childcare workers go will also be expected to make efforts to hire back the workers who were made unemployed.

The aim of the scheme is to ensure that the childcare worker is in a position to provide continuity of care and reopen its doors once the crisis passes, and to provide ongoing employment for workers in the sector.
The landmark package will also see childcare providers given funding equivalent to 15 per cent of their staff costs to pay for other expenses, including rent, utility bills and loan repayments, where applicable.

For childcare workers who make less than the €350 a week which is now available under the enhanced package of Covid-19 benefits, the Department will make a further top-up payment so they are not disadvantaged by staying in their job.

The future of the childcare sector had been imperilled especially by the Covid-19 outbreak. While it was forced to close alongside State educational providers like schools and colleges, its employees are paid privately. Many creches faced an enormous shortfall every month, with an estimated €12 million per month usually generated by fee income from parents across the sector likely to disappear.

The enhanced scheme will run in parallel to other schemes launched by the Government, for 12 weeks, and the intention is to roll it out as soon as possible.