Model Sarah McGovern also among those to agree settlements with Revenue 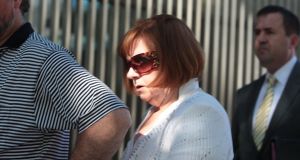 Former District Court judge Heather Perrin, who was sentenced in 2012 to two-and-a-half years for deception over a will, made a €233,452 settlement for failing to declare income tax

A leading Dublin-based restaurateur, a convicted former District Court judge, two landlords, a model and a television producer are among those to have paid more than €11 million in tax settlements in total with Revenue during the final three months of 2016.

The company that operates Dr Quirkey’s Good Time Emporium on O’Connell Street in Dublin also made the latest list of companies to agree deals with the Revenue Commissioners.

David O’Connor, a landlord and company director with an address at 61 North Main Street, Cork, made the biggest settlement recorded during the quarter, paying €983,149 to Revenue for underdeclaration of income tax and VAT.

Mr O’Connor is a managing director of Suits Distributors, one of Ireland’s largest suppliers of suits and casual wear for men.

Richard Larkin, another landlord with an address at Main Street, Clarenbridge, Co Galway, also made a settlement with Revenue totalling €832,637.

Also on the list is James Doherty, a farmer with an address at Ballyrobin, Ferrybank, Co Galway, who agreed to pay €839,110 for a penalty relating to the underdeclaration of €1.1 million in capital gains tax.

Former District Court judge Heather Perrin, who was sentenced in 2012 to 2½ years for deception after inducing a client to incorporate her own children as beneficiaries in his will, made a €233,452 settlement for failing to declare income tax.

Mr Canny previously criticised former Intel chief executive Craig R Barrett after he complained about having paid $200 for dinner for two at Peploe’s while on a visit to Ireland in 2004.

The restaurateur responded by telling the Sunday Independent that Mr Barrett should instead think about the tax breaks his company had enjoyed here.

Dublin Pool and Juke Box Limited, the company that operates Dr Quirkey’s Good Time Emporium, agreed a €42,273 settlement for underpayment of PAYE/PRSI. The company is owned by businessman Richard Quirke, who was previously behind a €480 million plan for a casino in Two Mile Borris, Co Tipperary.

Model Sarah McGovern, who is represented by Assets Model Agency and with an address at Little Wood, Stepaside, made a €37,355 settlement.

Stephen Caffrey, a motion picture and television producer with an address at Tritonville Road, Sandymount, made a €95,645 settlement for failing to pay tax.