Why do the Irish still owe more than the Greeks?

Ireland has third-highest government debt per capita, behind only Japan and US 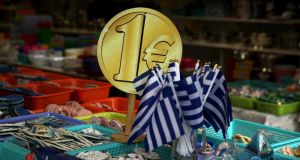 New figures show the Irish have a far higher government debt per person than even the Greeks. Photograph: Yiannis Kourtoglou/Reuters

It’s the poster boy for Europe; the former “PIIG” which shrugged off the shackles of austerity and returned to economic growth, slashing its sovereign debt in the process.

And yet if this is so, then why does Ireland continue to carry a shocking level of debt per person, the highest in Europe and the third highest out of 49 countries worldwide?

As KBC Bank chief economist Austin Hughes sees it, it’s a bit of a case of “lies, damned lies and statistics”.

“We’re one of the few countries where debt has started to ease, partly because bank-related debts are unwinding,” says Hughes.

Moreover the debt-to-GDP ratio, the typical metric to determine whether debt is sustainable – tracking, as it does, a country’s debt to its income – is also slumping, down to 77.9 per cent from a high of 125 per cent reached in June 2013, and is forecast to fall to 76 by year end.

Not only that, but Minister for Finance Michael Noonan has set a new target of 45 per cent to be reached by the mid-2020s, far below the 60 per cent range set out by the European Union. In Greece, on the other hand, the debt-to-GDP ratio is of the order of 177 per cent, and after a period of reduction is forecast to escalate thereafter.

In Greece, where the International Monetary Fund recently warned that the country’s debts were on an “explosive” path, the burden is just $31,797 per person. At the other end of the scale, Australia, Luxembourg and New Zealand all have debt levels of less than $20,000 per person.

The reason perhaps, comes down to how our GDP figure is collated. As was highlighted last year amid talk of “leprechaun economics”, the transfer of intellectual property rights and the level of multinational activity in Ireland flatters the level of economic activity.

This means that while there undoubtedly has been an improvement in Ireland’s debt burden, it is “altogether less spectacular” than the debt-to-GDP ratio might indicate – hence a higher debt per capita figure than might be expected.

“The improvement is real, but the scale of improvement is exaggerated,” Hughes says, adding: “There is that sense of ‘We had a crisis and now it’s gone away’, but these numbers clearly indicate it hasn’t gone away; it has eased, but there are still vulnerabilities in the economy.”

Indeed, as Hughes notes, the risks our debt burden poses come on two fronts: if interest rates were to rise substantially it would increase the cost of servicing this debt; while if the level of GDP growth is diminished this could sharply increase the aforementioned debt-to-GDP ratio.

A hefty debt burden does not mean, however, that it should not rise once more.

“Once there is an economic and social return on that debt, the reality is you can argue for a lot of areas of public investment,” says Hughes. “An increase in debt is reasonable provided it’s sustainable.”

So, like the consumer taking out a loan to further their education, perhaps compared with a credit-card debt for a holiday, there can be “good” and “bad” government debt too.

It’s not just government debt that the Irish risk being suffocated by: household debt, while still improving, is also high by European averages, at €31,096 per capita.

Although the most recent figures from the Central Bank, for February, show Irish households reduced debt as a proportion of income more than any country in the European Union over the previous 12 months, Irish consumers continue to be the fourth most indebted in the bloc, with a debt-to-disposable-income ratio of 144.8 per cent. This compares with 223.3 per cent for the Danes, the most indebted country in the EU, and less than 100 per cent in Spain, Greece, France, Germany and Italy.