Agenda: ‘Unemployment is a lagging indicator in any recession because businesses will hang on for as long as they can before failing’ 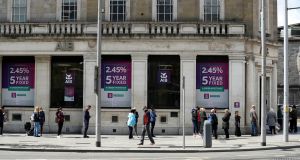 People queue outside an AIB Bank in Dublin city centre. Executives at the bank have been encouraged by the number of households who are now back on their feet financially following the Covid hit to the economy. Photograph: REUTERS/Jason Cairnduff

Eamonn Crowley, the new chief executive of Permanent TSB (PTSB), has been pleasantly surprised by how many borrowers have to be coming off Covid-19 loan payment breaks and returning to regular payments.

A little over three months into the job, Crowley told Davy analysts last week that between 1,500 and 2,000 borrowers who have availed of payment breaks since March will need additional forbearance as extended breaks for up to six months come to an end.

That is out of a total of 13,000 mortgage holders, personal borrowers and small businesses who availed of the payment holidays post the Covid-19 lockdown restrictions being introduced.

Crowley put the value of loans that may need additional relief at between €200 million and €300 million, equating to less than 2 per cent of gross loans.

About half of mortgage borrowers who availed of an initial three-month break offered across the board by Irish lenders returned to servicing their loans over the summer months, according to industry figures.

And the numbers requiring additional help in recent weeks as households start to come off extended six-month payment freezes have been lower than what Crowley, who was PTSB’s finance chief before becoming CEO, had been expecting.

He was not alone. Top executives at AIB, the Republic’s largest mortgage lender, and Ulster Bank also told Davy in a series of interviews last week that the level of households that have been able to get back on their feet after the initial shock has been encouraging, the stockbroker said in a report on Tuesday.

“The early indications are that the number of people going from six-month breaks back to payment is better than expected,” says Brian Hayes, CEO of Banking and Payments Federation Ireland (BPFI).

“The other positive thing is that even though there was a deadline of September 30th for borrowers to apply for the payment breaks, we didn’t see a surge of applicants coming forward in the lead-up to that. But the next two to three months are crucial.”

Crowley and his rivals spoke, however, before the National Public Health Emergency Team (NPHET) sent a letter to Minister for Health Stephen Donnelly last Sunday night urging that the country be moved to Level 5 pandemic restrictions – close to the type of lockdown seen earlier this year that ground the economy to a halt and pushed more than one million people on to some sort of State income supports.

While the Government resisted and opted to move the country to Level 3 from midnight on Tuesday, Tánaiste Leo Varadkar told members of his own parliamentary party hours before the measure kicked in that a “circuit breaker” lockdown could still be on the cards.

Adding to autumnal jitters EU and UK officials have been ratcheting up the rhetoric about the prospects of a cliff-edge Brexit with less than three months to go to agree a trade deal before transition arrangements run out.

Few people on either side expect the deadlock to be broken by the end of an EU leaders summit next Friday, the deadline British prime minister Boris Johnson has set for the outline of an accord. Ireland is by far the most exposed economy to Brexit of the remaining EU states.

“There is so much uncertainty hanging over businesses, households and banks with the twin issues of Covid-19 and Brexit,” says Richard Flood, director of investment management at Brewin Dolphin Ireland.

“Unemployment levels as a result of the pandemic alone are unlikely to peak until early next year, so it may be too early to put a final number on how many people will need further forbearance on their loans or go into default.”

He says any increased effort to slow down the pandemic with further restrictions is likely to hit the economy even more, and will undoubtedly have an impact on unemployment, people’s ability to service loans and lead to higher loan impairment charges at the banks.

“Unemployment is a lagging indicator in any recession because businesses will hang on for as long as they can before failing,” says Flood. “Adding Brexit to the mix is a further complication. Who really knows for certain what impact it will have on the Irish economy and borrowers?”

The Central Bank of Ireland said last month that there were 90,539 active payment breaks across Irish households and businesses as of early September, down 40 per cent from data for the end of June, just before initial three-month payment holidays came to an end.

The level of mortgages subject to payment moratoria dropped from 11.1 per cent of the total value of Irish home loans to 6.1 per cent during the period, while the ratio for small- to medium-sized businesses declined from 22.9 per cent 17.6 per cent.

The breaks were introduced by the banks in the middle of March as the country lurched towards lockdown. As a slew of lenders in other countries adopted a similar approach, European regulators issued guidelines that allowed banks to avoid tipping the loans into non-performing status or marking the breaks down as missed payments on borrowers’ credit records.

The European Banking Authority (EBA) decided last month against extending its guidelines beyond the end of September, saying that while the special breaks were “an effective tool to address short-term liquidity challenges” caused by the pandemic, banks needed to return to offering relief on a “case-by-case” basis.

Banks can still offer extended payment breaks – or other solutions such as extending loan terms or allowing borrowers to go interest-only for a period – as they deal with those who are unable to return to regular payments. Some may need deeper restructuring involving loan writedowns.

However, from now on lenders must record any new payment breaks and other arrangements on the Central Credit Registry – and they will also have to start moving such loans into riskier categories on their own books.

Brendan Burgess, founder of askaboutmoney.com, has long been opposed to extending blanket payment breaks beyond six months. “It’s not in the interest of borrowers to allow the problem to grow,” he says.

But the consumer campaigner argues that the September cut-off point for applying for the Covid-19 relief was too crude.

“It was very easy to get a payment break. But what about the responsible borrower who got into difficulty in March and decided instead to eat into their savings to meet payments? It’s now October and their situation may not have improved - but they’re stuck. They may be able to get payment breaks but it will affect their credit record.”

To be sure overall savings have jumped this year. The Central Bank says on Monday that Irish household deposits increased by €7.3 billion alone between April and July, the height of the Covid-19 crisis to date, compared to €2 billion for the same period last year as individuals became more cautious about their finances and had fewer opportunities to spend.

While economists say the overall high savings rate will serve to fuel a recovery by the economy as it comes out of coronavirus haze, it masks the pain that many households are going through.

“We’re facing what’s known as a K-shaped recovery in Ireland, where some people and businesses are absolutely not impacted by the shock, while others are very much struggling,” says Flood.

A K-shaped rebound occurs when different parts of an economy move in opposite directions after a sharp recession. While IT and pharmaceutical multinationals based in Ireland have been thriving through the pandemic, hospitality and many parts of the services, retail and wholesale industries are struggling. Corporate insolvencies are predicted to spike in 2021.

Goodbody Stockbrokers analyst Eamonn Hughes estimates that about 2.4 per cent of Irish mortgages will end up needing further forbearance or restructuring as extended payment breaks roll off over the coming months. However, a further 1 per cent of mortgages could end up in trouble by the end of next year, he says.

The lower figure is based on a view that house prices – which have held up so far – will fall 13 per cent compared to a 50 per cent slump during the property crash.

The low figures also reflect that fact that for now many of the individuals who have been hardest hit by the crisis, such as lower-paid workers in retail and hospitality, are not homeowners.

Mortgage-lending restrictions introduced in 2015 to prevent another property bubble have also helped.

Problems facing businesses were the main concern of the country’s five retail banks as they set aside a total of €2.6 billion in the first half of this year to absorb an expected surge in bad loan losses, pushing the industry into loss-making territory for the first time since 2013. Banking executives have suggested that loan-loss provisions across the banking sector may reach €3.6 billion for the year as a whole.

Small- to medium-sized businesses (SMEs) employed about 1 million people in Ireland at the end of last year.

The Central Bank estimated this week that the Irish unemployment rate, which topped 29 per cent in April when those in receipt of Covid-19 jobless benefits were included, will average 15.1 per cent for 2020 before easing back to 8 per cent next year

This, however, is under the bank’s “baseline” case that only sees sporadic flare ups of the virus leading to localised lockdowns but where the economy broadly remains open. Its severe scenario, resulting from a second wave requiring more widespread and stricter lockdowns, would result in an average 12.5 per cent unemployment rate next year.

Might the optimism bankers are feeling, as thousands of borrowers returned in recent weeks to regular payments after the Covid-19 breaks, prove short-lived?

Unlike during the financial crisis, when Irish banks had to raise tens of billions of euro from taxpayers and overseas parents to avoid collapse as they dealt with a surge in loan losses, banking chiefs and analysts – from Davy and Goodbody in Dublin to overseas firms like UBS – are confident that capital reserves are not an issue this time.

“The banks are in very good shape from a capital point of view, so there is no existential risk to them this time round,” says Flood. “They can weather the storm comfortably.”

Having come through the worst arrears crisis in Europe during the financial crisis, Irish banks problem-loans units are much more prepared to work with distressed customers to restructure soured loans, says Hayes.

“If there is any lesson to be drawn from the last crisis it’s that the earlier a borrower engages with their lender, the easier it is to find a solution.”