Planet Business: That’s not all, folks 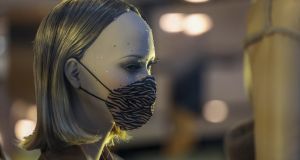 Collapse of Arcadia: the pandemic has proven one obstacle too many for the Topshop owner. Photograph: Jason Alden/Bloomberg

Image of the week: Fall of Arcadia

In an echo of a trend seen in parts of Asia at the start of the Covid-19 crisis, a mannequin in a central London fashion outlet has been thoughtfully accessorised with a face-mask. This mannequin’s problems go beyond a mere pandemic, however, as this is the window of the flagship Topshop store on Oxford Street. Topshop owner Arcadia has wobbled into administration, its collapse threatening thousands of jobs - including about 500 in the Republic - unless a buyer or buyers can be found. It was in 2002 that controversial Arcadia chairman Philip Green acquired the then publicly quoted fashion empire, a descendant of the menswear business started by Montague Burton in 1903. However, a bullish high street expansion and corporate blindness to the rise of online rivals have proven a toxic combination for the once-thriving business. Arcadia, in Greek mythology, was the home of Pan, god of the wild and companion of the nymphs. Later, it came to represent a lost idyll, which seems more appropriate.

92
Years since the Dow Jones Industrial Average on Wall Street had as good a November as it did last month. Yes, that was in 1928. Luckily, nothing bad happened in 1929.

11.84%
Gain for the blue-chip index last month. While election Novembers are usually better than non-election Novembers, this was just a “monster” month full stop, with vaccine trial results plus Joe Biden’s victory giving investors several shots in the arm.

406
It has been this many months since the last time any monthly rise for the Dow was bigger in percentage terms. This takes us back to January 1987. Luckily, nothing bad happened later in 1987.

Getting to know: Stewart Butterfield

It’s been a big week for Canadian billionaire and serial tech entrepreneur Stewart Butterfield, chief executive of the weirdly cool work communication tool Slack. The company he co-founded in 2009 has been sold to Marc Benioff’s business software giant Salesforce for a whopping $27.7 billion. Champagne emojis all round, if not some actual champagne, even if the prevailing feeling was that Slack could have had a better pandemic if only Microsoft Teams hadn’t been so quick on the draw. Butterfield, who crossed the line into billionaire status when Slack publicly listed in 2019, is now estimated to be $235 million richer as a result of the Salesforce deal. Not bad for a man who calls himself a “thought loser” in his Twitter bio. It is far from apps and team channels that Butterfield, also the co-founder of Flickr, was initially raised. He spent his early years in a log cabin in a remote part of Canada with hippie parents and no electricity. Sounds like bliss.

With cinemas dark for the wrong reasons for much of the year and a barrage of would-be blockbusters postponed until 2021, beleaguered film studios and exhibitors alike will be hoping that next year features a hit or two. Here are five of the contenders:

1. Everybody’s Talking About Jamie: No matter how it performs at the box office, the British film will serve of a sad reminder of another industry’s woes. It is based on a thoroughly uplifting West End musical that should have been putting bums on seats all throughout 2020.

2. A Quiet Place II: The horror sequel starring Wild Mountain Thyme’s Emily Blunt was on the verge of its release last spring when a real-life horror threw a spanner in its works.

3. Top Gun: Maverick: It has been 34 years since the first Top Gun. A Covid-delay of just over a year for the sequel will scarcely make too much of a difference to people who can remember the 1980s.

4. West Side Story: A Disney remake courtesy of Steven Spielberg, this should have filled the Christmas season musical slot gamely claimed last year by Cats. Instead it is pencilled in for your December 2021 pleasure.

5. No Time to Die: In which James Bond finds himself hot on the trail of a mysterious villain armed with a dangerous new technology. It’s not a deadly virus, by any chance?