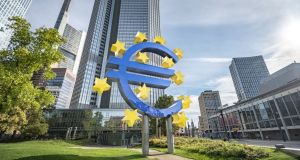 Calls for debt relief may not be welcome at the ECB. Photograph: iStock

The European Central Bank should consider wiping out or holding forever the government debt it buys during the current crisis to help nations recover and restructure, a top Italian government official said.

“Monetary policy must support member states’ expansionary fiscal policies in every possible way,” cabinet undersecretary Riccardo Fraccaro, Prime Minister Giuseppe Conte’s closest aide, said in an interview in Rome on Wednesday. That could include “cancelling sovereign bonds bought during the pandemic or perpetually extending their maturity.”

The Italian demand reflects the nation’s deep fiscal hole as it tries to counter the crisis. It was suffering under a high debt burden and sluggish economy even before the pandemic, and Fraccaro noted further costs ahead such as the European Union’s green energy transition.

Mr Fraccaro’s call for debt relief won’t be welcomed at the ECB’s Frankfurt headquarters though. Officials there repeatedly say they must adhere to EU law banning them from such monetary financing.

When ECB President Christine Lagarde was asked in the European Parliament last week about the possibility, she replied that “I don’t even ask myself the question – it’s as simple as that – because anything along those lines would simply be a violation” of the law. Italian finance minister Roberto Gualtieri has also rejected the idea.

Mr Fraccaro argued that the ECB can rely on a separate part of the Treaty which obliges it to support the EU’s general economic policies, as long as that doesn’t conflict with its primary objective of ensuring price stability. He noted that the central bank has fallen short of its inflation goal of just-under 2 per cent for years, and is now even further off because of the pandemic.

“For the central bank, it’s one thing to be independent from politicians, it’s another to not understand where the world is going,” he said. “The ECB should help countries relaunch their economies.”

Italy – with a debt load that is set to soar to around 160 per cent of gross domestic debt after more than €100 billion of fiscal spending to counter the pandemic crisis – is already benefiting from the ECB’s emergency stimulus.

The pandemic bond-buying program is skewed toward stressed nations, helping drive yields on Italian bonds to record lows. The nation can currently borrow for 10 years at an interest rate of around 0.6 per cent, cheaper even than the US.

Yet that program is temporary, linked explicitly to the “crisis phase” of the pandemic, meaning investor pressure on the country could eventually mount again.

Italy has a track record of urging an overhaul of European Union institutions. Claudio Borghi, an economic adviser to the League party, called on the ECB to buy bonds to fund infrastructure projects, and to play a bigger role in stimulating sluggish economies by financing investment when his party was in power last year.

“The ECB does not have an issue with debt -- it can print as much money as it wants,” Mr Fraccaro said. “It can continue to buy sovereign bonds and allow member states to invest, protecting them from the market.” – Bloomberg