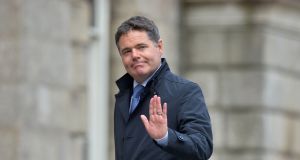 “The scale of Government intervention to support businesses mean that today’s Exchequer returns do not provide the clarity that previous November receipts have,” Minister for Finance Paschal Donohoe said.

The public finances were €8.9 billion in the red last month as the second wave of Covid lockdowns saw spending on pandemic-related supports rise and tax receipts slide.

This compares to a surplus of just €3.3 billion this time last year, and marks a year-on-year deterioration of €12.3 billion.

The latest exchequer returns, published by the Department of Finance, show the Government took in €51.1 billion in taxes in the year to the end of November. This was 6.9 per cent or €3.7 billion down on last year.

Income tax receipts were down €1 billion, or 29 per cent year on year in November, primarily as a result of an extension to the “pay and file” deadline for self-assessed taxpayers, which was pushed out to December 10th because of Covid-19 restrictions.

With much of the retail sector back in lockdown mode over the past six weeks, VAT took an even bigger hit.

Receipts from the sales tax were down by 17.7 per cent or €2.6 billion on the same 11-month period last year, reflecting what the department described as a “significant decline in personal consumption”.

Corporation tax receipts cumulatively came to €10.7 billion, up 7 per cent on last year, and almost on a par with last year’s record €10.9 billion albeit that was for 12 months.

November is generally the largest month for corporation tax.

The rise reflects increased departmental drawdown in response to the Covid-19 pandemic, particularly from social protection and health, the department said.

“The scale of Government intervention to support businesses mean that today’s exchequer returns do not provide the clarity that previous November receipts have,” Minister for Finance Paschal Donohoe said.

“However, the broad themes of the year to date are apparent. PAYE receipts are holding up remarkably well; similarly corporation tax – although with a high degree of unpredictability and uncertainty,” he said.

“ Taxes based on personal consumption, particularly VAT, have suffered greatly from the necessary public health restrictions. As set out in Budget 2021, the Government will continue to use the taxation system, where appropriate, to support individuals and business throughout this crisis,” he added.

Reacting to the figures, Peter Vale, tax partner at Grant Thornton Ireland, said: “Given the deferral of the income tax filing deadline to December 10th, it’s hard to read much into the November income tax numbers, which were, not surprisingly, well down on the same month last year.”

“Year to date income tax has proven to be very resilient and it wouldn’t be a surprise to see the deficit in November clawed back this month, once taxpayers file their returns,” Mr Vale added.

“With most retail outlets now open again following restrictions throughout November, there will be optimism that pent up demand will see large spend over the Christmas period, translating into strong VAT receipts in January.”